“Really Fantastic and Great to Behold” 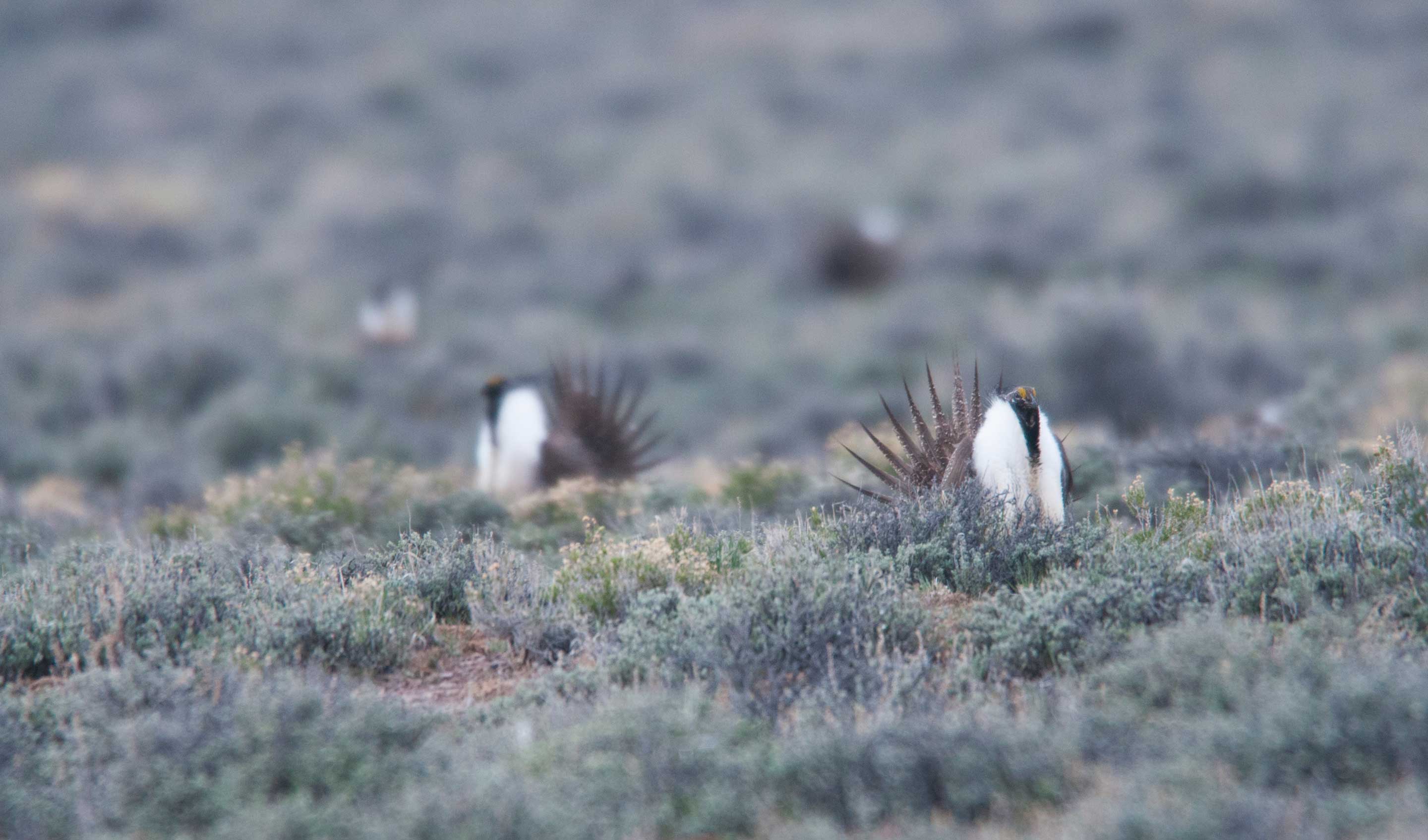 When spring blossoms along the Columbia, nests start appearing in the budded trees and little brown cottontails scamper under the bushes. It’s the best time of the year for naturalists of every interest because plants and animals are renewed. After a winter of heavy rain and snow, most of us welcome the “greening up” of the landscape and that’s particularly true in the sage lands of the Pacific Northwest.  April and May bear witness to the birth of many little critters and it’s sometimes a reminder that a few may be missing or nearly gone in the 21st Century, including the Greater Sage-Grouse. Reintroduction efforts by the Yakama Nation and state Fish and Wildlife Services try to help the sage-grouse regain ground on the Columbia Basin.

“One of the Great Basin’s most distinctive denizens,” wrote Edmund C. Jaeger in 1959, “is the sage-grouse, a chicken-like bird whose natural abode is restricted to sagebrush-covered desert lands.”[1] Lewis and Clark tracked the sage-grouse from the headwaters of the Missouri River to the sagebrush plains of the Columbia River. They named it “Cock-of-the-plains” and as early as 1827 ornithologist Charles Lucian Bonaparte delivered its scientific name: “Centrocercus (‘pointed tail feathers’) urophaseanus (‘Tailed pheasant’).” [2]

One of the most notable and strikingly handsome features of the male sage-grouse is his tail. When spread fan-like, the male dances a merry jig on a “lek” – a piece of land that the birds return to each year as a traditional dance arena for attracting females and demonstrating their flare and great moves.  “It’s a site really fantastic and great to behold,” wrote oologist and US Army Captain Charles Bendire in 1877. “Early one morning in the first week of March, I had long-wished for opportunity to observe the actions of a single cock, while paying court to several females near him, and I presume he did his very best.  His large pale yellow air sacs (of the neck) were fully inflated, and not only expanded forward but apparently upward as well, rising at least an inch above his head, which, consequently was scarcely noticeable, giving the bird an exceedingly peculiar appearance. He looked top-heavy and ready to topple over at the slightest provocation.”

“The few long, spiny feathers along the edges of the air sacs stood straight out, “ Bendire continued, “and the grayish white of the upper parts showed in strong contrast with the black of the  breast. His tail was spread out fan-like, at right angles from the body and was moved from side-to-side with slow quivering movements. The wings were trailing on the ground. While in this position he moved around with short, stately and hesitating steps and gingerly, evidently highly satisfied with his performance, uttering at the same time low, grunting, guttural sounds, somewhat similar to the purring of a cat when pleased, only louder.”[3]

The sage-grouse thrives on the tender buds and bitter aromatic leaves of the three-toothed sage (Artemesia tridentate). Its summer diet is supplemented with various leaves, flowers, and the pods of wild legumes, and even a few insects like ground beetles, grasshoppers and moths. In the 1950’s along the Columbia River, wildlife specialists realized that stockmen raising sheep particularly hoped to replace the sagebrush with rich grasses for grazing. When snow is on the ground, sagebrush is almost the exclusive diet of the sage-grouse but where eradicated, the birds cease to exist. Its digestive tract differs from most birds in that it is designed to digest soft foods only. Some scientists speculate that an abundance of sage-grouse helped quell the plagues of grasshoppers and crickets that later destroyed thousands of acres of settlers crops because there were no natural predators. Today, pesticides seem to replace the sage-grouse for eliminating these pests.[4]

Sage-grouse usually run when surprised rather than fly. That may have contributed to their demise with the onslaught of foreigners crossing the plains. John K. Townsend, an American naturalist and ornithologist who resided at Fort Vancouver after crossing the continent on horseback in 1833, recalled how the birds huddled together in flocks, or “packs,” of fifteen or twenty, and they were “so exceedingly tame as to allow an approach to within a few feet, running before our horses like domestic fowls, and not unfrequently hopping under their bellies, while the men amused themselves by striking out their feathers with their riding whips. When we first saw them, the temptation to shoot was irresistible; the guns were cracking all around us, and the poor grouse falling in every direction; but what was our disappointment, when, upon roasting them nicely before the fire, we found them so strong and bitter as not to be eatable. From this time the cock of the plains was allowed to roam free and unmolested, and as he has failed to please our palates, we are content to admire the beauty of his plumage, and the grace and spirit of his attitudes.”[5]

As this excerpt indicates, naturalists were not necessarily conservationists in the 19th Century – many were scientists and hunters who, without the benefit of photography, killed specimens and practiced taxidermy to preserve them for further study. Many sold their collections of rare birds, or plants, or reptiles to other collectors in Europe and the US. They also sold bird plumages to milliners and hat makers, and just as the popularity of beaver-skin hats for men created a profitable business that nearly eradicated beavers in the American West, women’s hats also contributed to the extinction of some rare birds. By the 1880s, many fine birds were slaughtered for their plumage – a fine addition to women’s towering hats, also known as “3-story” or “flowerpots” and for a very good reason. They soared atop the hair, appearing as if a roof on the tower of a building. Bird skins and feathers were a fine addition.[6]

Edmund Jaeger wrote in 1958 that the sage-grouse formerly ranged eastward into western Nebraska and North Dakota, and it was once common in Northwestern New Mexico, but the shepherds, wood gatherers and hunters were responsible for its extermination there. The bird met a similar fate in the Black Hills of South Dakota.[7]

Jaeger continued, “There are thousands of acres of sageland where it could be reintroduced, and if given the protection from hunters and developers, it probably would make a good comeback.”[8] However, the sage-grouse was in 2015 removed from the candidacy list for federal protections. [9]

Washington Department of Fish and Wildlife Biologist Derek Stinson said the reduction in the number and distribution of sage-grouse in Washington is largely due to habitat loss and degradation. “In Washington, sage-grouse historically ranged from the Columbia River to Oroville, and from the eastern Cascades foothills to the Spokane River. By the early 1900s, sage-grouse had disappeared from much of that area. The population on the Fitzner and Eberhardt Arid Lands Ecology Reserve at Hanford in Benton County was evidently lost after catastrophic wildfires in 1981 and 1984. The breeding population in Lincoln County was gone by 1985 because of habitat changes. Sage-grouse have survived in parts of Douglas County that were not converted to agriculture, and on the Yakima Training Center, a military reservation where development did not occur,” Stinson said.[10]

Greater sage-grouse are an important cultural and wildlife resource for the Yakama people. Young tribal hunters were taught stalking techniques with sage-grouse as the quarry. As their skills increased, hunters shifted their focus to larger game such as deer or elk to feed their families and their communities. Sage-grouse courtship displays inspired traditional dance of the Yakamas that continues to be passed down through the generations. The loss of sage-grouse since the 1960’s on Yakama lands was the loss of a cultural resource for the tribe.

Reintroduction of wild Greater sage-grouse on the Yakama Reservation began in 2006 with the release of 37 grouse from Hart Mountain, Oregon.  Since then, 190 more grouse have been released and marked. In 2014, a lek was established and monitored to determine the breeding population. As many as 15 males have been identified displaying their courtship behavior. [11]

The sage-grouse faces an uncertain future, but with the help of the Yakama Nation and state programs, it is possible that they may once again thrive on the Columbia Basin.

[3] Author’s Note:  Captain Charles Bendire was born in Austria and fled civil war in Europe as an immigrant to the USA in 1850. Bendire was well-educated in the sciences and literature in the House of Hapsburg. He wrote brilliantly and spoke and read several languages fluently, including Latin, but as an immigrant without family in America, he had difficulty finding work for nearly a decade. He enlisted in the Union Cavalry at the beginning of the Civil War and quickly rose through the ranks to a field commission as a lieutenant. Without another calling, he remained in the Regular Army at the end of the war and accompanied several exploration expeditions to the West as military protection forces. With scientists and naturalists, Captain Bendire acquired a keen interest in oology (collection of birds’ eggs). He was an expert marksman, taxidermist and eventually a defender of birds rather than a hunter. He donated his extensive and valuable collection of birds’ eggs to the Smithsonian where upon military retirement in the mid-1880’s, Bendire became the Curator of Ornithology.

[5] Townsend, John K. Narrative Of A Journey Across The Rocky Mountains, To The Columbia River, And A Visit To The Sandwich Islands, Chili, &C. With A Scientific Appendix. Philadelphia: Henry Perkins, 1839. 77.