“We see Celilo as a legacy, an icon, a cultural, religious kind of place. We want to keep that place present on the river.” – Antone Minthorn 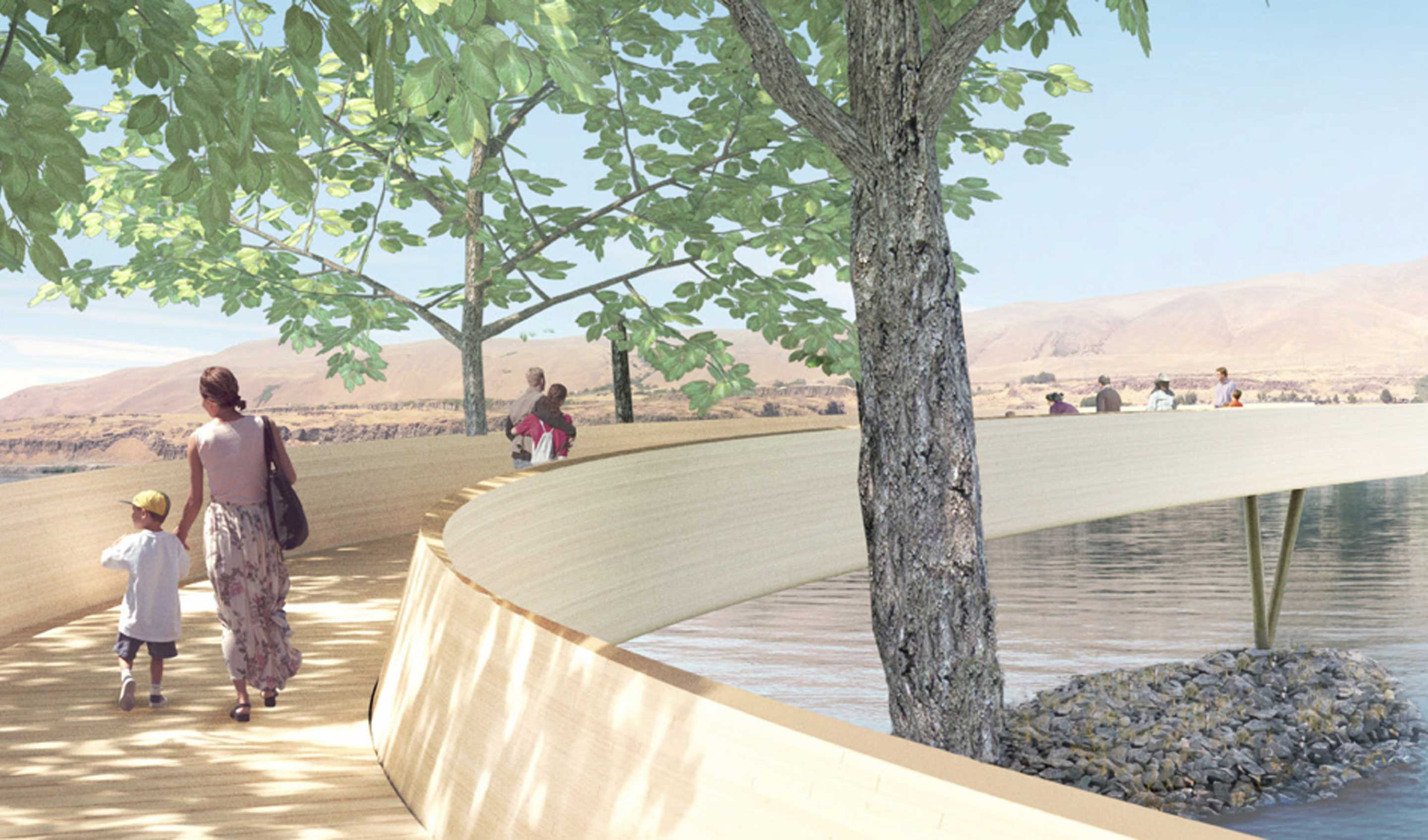 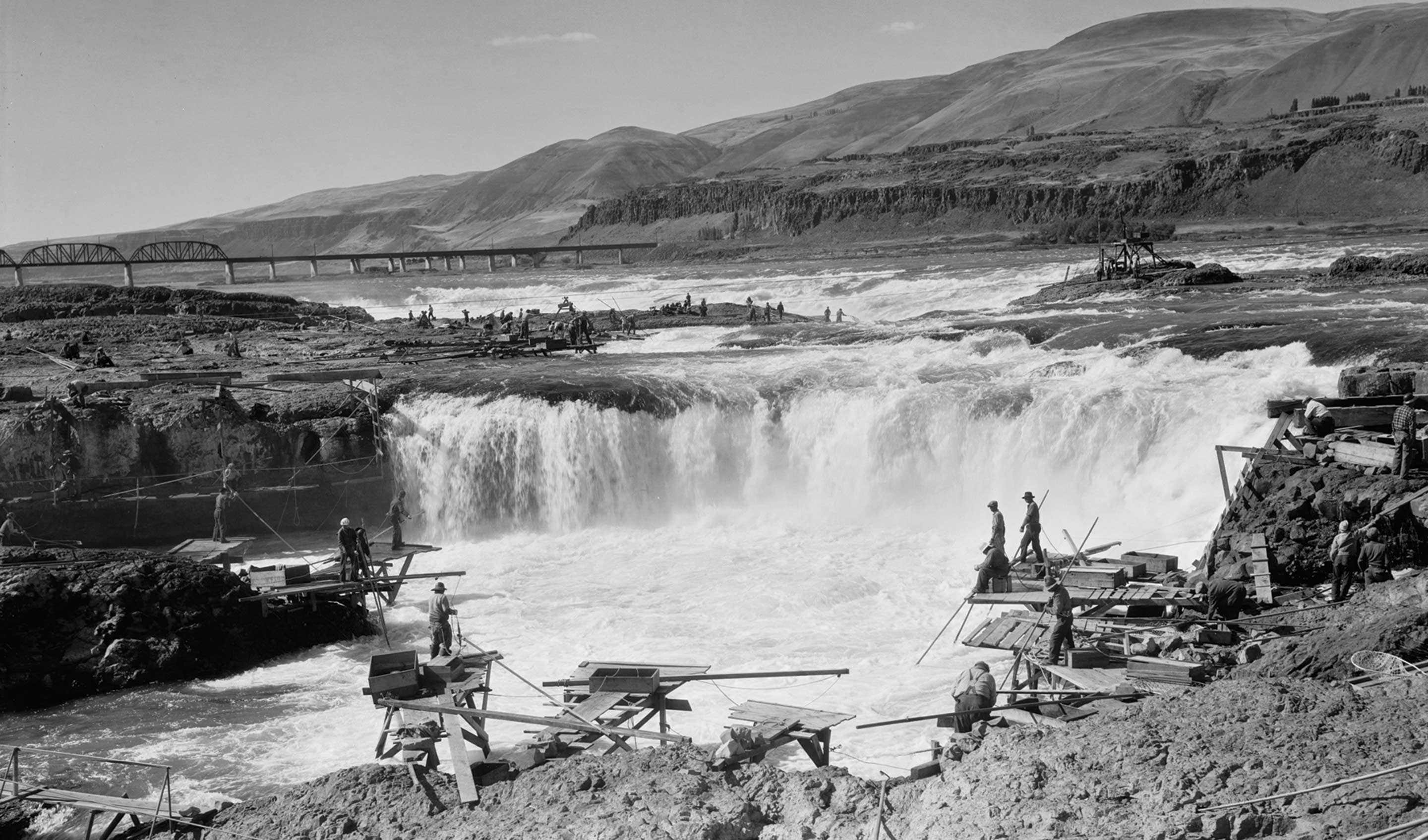 For generations, Celilo Falls was the center of culture and commerce in the Northwest, the oldest continuously inhabited place in the region. It was also one of the most productive fisheries in North America.  The roar of the falls could be heard for miles. On March 10, 1957, that roar fell silent when gates of The Dalles Dam closed. Celilo Falls was flooded in a matter of hours, the roar silenced. The Confluence Project proposed for Celilo Park is designed to educate people about Celilo Falls and honor the people who have lived and fished on this river for generations and will continue to do so for generations to come.

Please note: This project is not yet completed and is currently on hold.

Maya Lin’s design for the Celilo Arc is a 500-foot elevated walkway inspired by the indigenous fishing platforms that still populate the shores of the Columbia River system. In one year, enough water pushes through the Columbia River Gorge to bury an area the size of California under 18 inches of pure snowmelt. At Celilo Falls, the river once went into free fall, all froth and fury. The roar of the falls could once be heard for miles around at one of the busiest fishing sites in North America. At Celilo, millions of Pacific salmon made the transition from long-haul distance swimmers to high jumpers, leaping up the side pools of the falls, a fight with gravity, and a down-pounding current. Here, the Columbia River tribes used nets, gaff hooks, spears, and baskets to bring home the tastiest species of salmon, the oil-rich Chinook. Celilo Falls hosted a trade market as well, an open-air exchange where for tens of thousands of years inland tribes arrived with bison skulls, elk hides, and teeth to exchange for the coastal dwellers’ jewelry made from surf-polished seashells. When the Corps of Discovery passed through this place, Lewis and Clark called it “an agitated gut swelling, boiling and whirling in every direction.”

The Celilo Falls were submerged in 1957 with the construction of The Dalles Dam, disregarding federal legislation granting the Yakama, Nez Perce, Confederated Tribes of the Umatilla, and Confederated Tribes of Warm Springs fishing rights to their “usual and accustomed places” and destroying access to this life-sustaining center. The flooding of Celilo Falls was an enormous and historic tragedy for the Columbia River Treaty Tribes whose members lived and fished at Celilo, and for the fishery resource and environment of the Columbia River. “We see Celilo as a legacy, an icon, a cultural, religious kind of place. We want to keep that place present on the river. We want it to remain a part of us. The Indian tribes. Celilo is kind of like a stamp that signifies that the falls are still a part of us,” says Antone Minthorn, who has served as Chairman of the Board of Confluence since its inception. For this reason and others, the long-recognized primacy of Celilo’s historic (and contemporary) trade network along the Columbia River system has been stewarded by collective efforts by community leaders, tribes from the Pacific Northwest, and organizations such as the Columbia River Inter-Tribal Fish Commission.

The issues and problems being addressed by Confluence are national, regional, and local in scope and significance. Minthorn states that this project can help the different cultures better understand each other — and perhaps create a better future together. “We have survived the tidal wave of immigration to our country. The American public needs to hear these stories of survival. This place, the United States of America, is our home,” he says, “but we all have a voice in shaping a legacy for our children.”

Celilo Park is located on the Columbia River, just north of I-84 off Exit 97. Turn north off the exit and cross the railroad tracks. The proposed Confluence Project here will be located at the west end of the park.