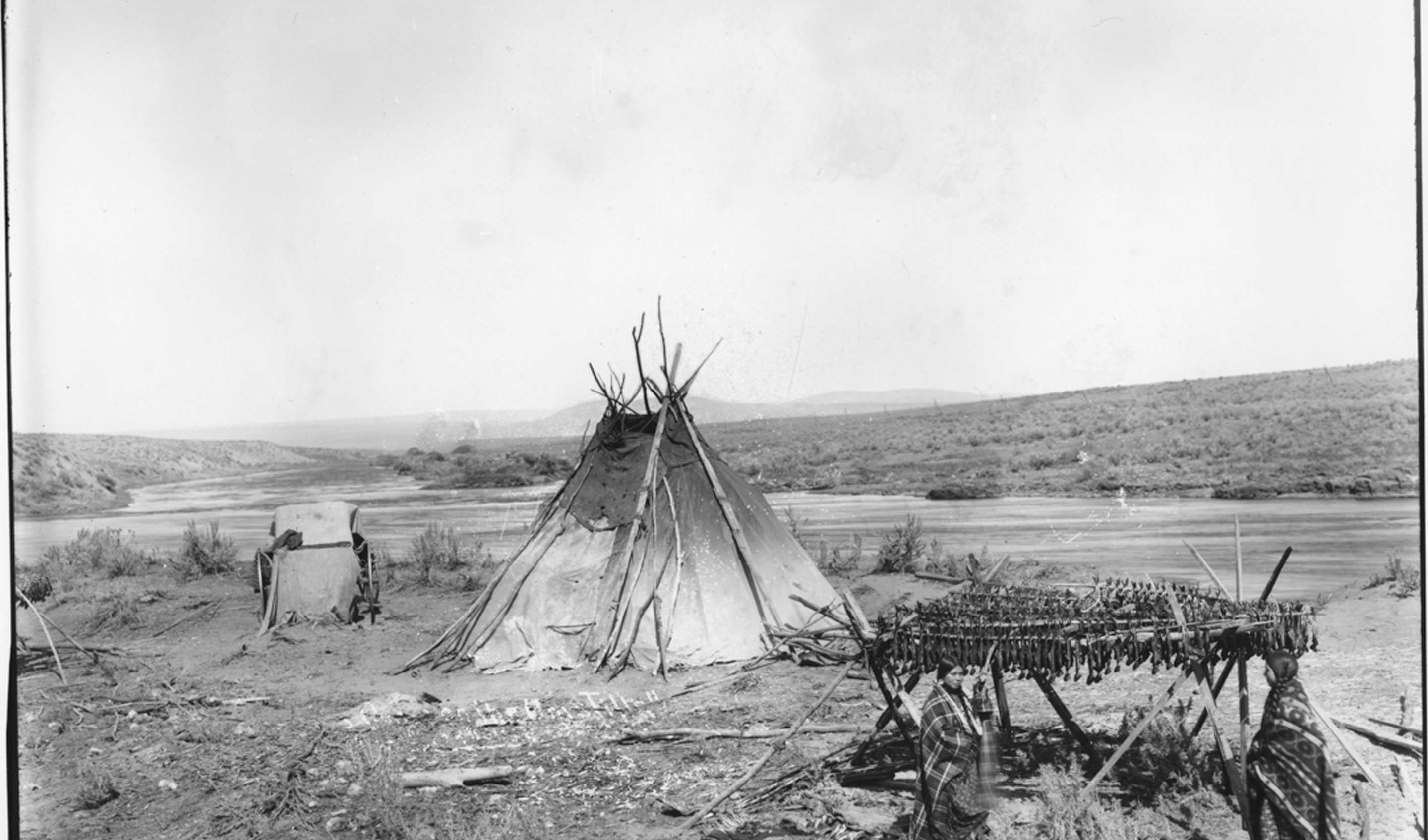 Dying eels at the camp of Billy Barnhart, a Umatilla Indian, on the bluffs overlooking the Umatilla River, on the Umatilla Reservation. Two women stand besides a rack in which the lamprey are hung, 1903.

For more than ten thousand years tribes from the Pacific Coast to the Rocky Mountains followed native trading routes to this river crossroads of the Snake and Columbia Rivers. Sacajawea Park was a significant site because it is the “confluence” of the Columbia, the Snake and the nearby Yakima, Walla Walla and Umatilla Rivers. At the time of the Treaty of 1855, the various bands and groups of native people of the Columbia Basin were named for the rivers just mentioned. [1] These tribes and the Nez Perce of the Clearwater River all traded and gathered for business and kinship at the Sacajawea Park site, as well as several other “confluence” sites such as Celilo Falls and the Vancouver Land Bridge.

Sahaptin-speaking people of the Columbia Plateau followed the seasons gathering, hunting and fishing according to annual cycles. Unlike the fertile hunting grounds of other native sites, the trade site at Sacajawea Park was parched and barren of lush berries or tall forests, but the rivers were teeming with salmon and steelhead. The Walla Walla bands that lived there were extended families of the Upper Columbia River and Plateau tribes. With the exception of fish, food was scarce, the region was treeless, and very little game except lizards, snakes and sage grouse roasted on the evening fires.

The regional tribes gathered seasonally for salmon and steelhead fishing in the Snake, for trade between the Plateau tribes and the Plains tribes from the distant Rocky Mountains, and for exchange with the other Mid-Columbia River tribes who journeyed from as far away as Celilo Falls, including the Yakamas, Warm Springs and the Umatilla. They gathered for the feasting and seasonal recreations, ceremonial dances and song. They reunited with family members who were now joined into other bands, grandparents playing and teaching the children of their sons and daughters who may have spoken other tribal languages.

Kinship and marriage were distinctive practices at this site. To extend trade relations and to strengthen blood lines, Indian men and women usually married outside of their communal band and frequently outside of their tribe. Often, women went to live with their husbands’ families and they soon became linguistically fluent and conversant with the cultural habits of other bands. In this manner, cultural practices, ceremonies, music and dance spread throughout regions and were often shared between tribal families and groups. Women, as well as men, actively participated in trade, not only as interpreters but as successful traders and bargainers. Tribes converged at the site from many points of the compass: the Upper Plateau tribes, the Umatilla to the south, and all traded and interacted with the Plains and Great Basin Indians such as the “Snakes.”[2] Trade goods from coastal Indians such as seashells and wooden planks gathered in western Washington also included iron, clothing and jewelry traded from ships of the maritime fur trade. The inland tribes traded blankets, horses, and dried foods such as fruits and buffalo meat or hides. Confluence trading grounds helped establish the economic well-being of Indian communities, cementing inter-tribal relations. Language and communication between bands of tribal peoples evolved at sites such as this as families shared information, renewed old acquaintances, and carried out the business of trade. This was an opportunity to inform tribes of newcomers to their regions and to share reactions to new developments of nature and humanity.

When Lewis and Clark passed through this region in 1805, they were guided by Toussaint Charbonneau and his Lemhi-Shoshone wife Sacagawea. She likely led them there because she knew of the trading ground and the Columbia River as the water highway to the Pacific Ocean. Here, the Corps of Discovery converted their travel on foot or horseback to canoe and maritime navigation as they plied the choppy waves of the flowing river.

Little was recorded by the famous explorers at this site but expedition member John Whitehouse remarked on the day they reached the confluence of the rivers, October 16, 1805, “We found about 2 hundred or upwards camped at the point between the two rivers, a very pleasant place.”[3]

Environmental conditions were underscored at the time of Lewis and Clark’s journey. An excerpt from Passage through the Garden reveals much about the conditions that existed until the late 1870s when the site took dramatic turns:

“During no part of their journey did Lewis and Clark and their men make such an abrupt environmental transition as they did upon entering and leaving the Columbian Plain not only in physiographic but in climatic, biotic, and cultural characteristics. For the upthrust of the Cascade Mountains to the west cuts off the flow of moisture-bearing air masses from the Pacific, and the shift from humid to arid climatic patterns is rapid indeed. The climatic transition means a biotic transition as well, and the rolling bunch wheat grasslands and immense sagebrush flats that met the explorer’s eyes were great contrasts to the huge trees of both the eastern and western ranges surrounding the Plain. What one observer termed ‘the barren monotony’ of the landscape was heightened for Lewis and Clark by an almost total absence of wildlife; the Columbian Plain did not teem with the herds of buffalo, deer, elk, and antelope that made the Great Plains of the Missouri and Platte such a paradise for the expedition’s hunters.”[4]

The non-tribal Euro-American viewpoint precluded all knowledge of the perpetuation of native life within the Plateau region where Indians had thrived successfully for thousands of years, living with the land and the rivers, appreciating the gifts it bore and declining to impose foreign lifestyles and standards on their existing environment. Change came rapidly, but the tribes tried to preserve and practice their beliefs, living within their culture and traditions. Broken treaties, Indian wars and the relocation of tribal bands to reservations diminished the business of trade and socializing at the Sacajawea site. Within the decade of 1879-1889, many traces of tribal life were eradicated with the construction of Ainsworth, WA, and the Northern Pacific Railroad sawmills.

Many Walla Walla (Wallula) people moved to the Umatilla Reservation in the early 1870’s. The ceremonies of kinship, weddings, and first foods continued in the longhouses on the reservations. Environmental changes rapidly transformed the Sacajawea Park Site: newcomers replaced the Indians, fields were irrigated, dams were built, and new industries, agricultural products and range animals were introduced. Two hundred years later the tribes are revitalizing traditions and restoring economies and natural resources through self-governance and cooperative efforts. At the confluence of the Columbia and Snake Rivers, tribal elder Antone Minthorn reminds us:

“Look closer to understand better. Realize the power of it – look around it today – activities, towns and people. To help people live…we are one with it.”

[1] The spelling of the Yakama Tribal Nation changed in the late twentieth century.

[2] Lewis & Clark referred to the Shoshone people as a small part of the greater “Snake” tribe. “Shoshone” means “in the valley.” Sacajawea was from the “Lemhi” Valley. Salmon was a mainstay in the diet of the Lemhi-Shoshone band whereas most of the Shoshone depended on wild game and buffalo on the Plains.