Gnarled and twisted, standing alone on the north bank of the Columbia River close to the Welcome Gate of the Confluence Land Bridge, a lone apple tree has produced fruit each year for nearly 200 summers. As the oldest domestic fruit tree introduced to the Northwest, it is the likely progenitor of today’s $3.4-billion dollar apple industry of Washington State.

That’s an industry birthed on the traditional gathering grounds and reservation lands of Columbia River tribal peoples: the Chinook (at Fort Vancouver and the Cowlitz Farm); the Nez Perce at Alpowa (Chief Timothy’s orchard), and at Fort Simcoe (Yakama Indian Reservation.) The roots of the industry may be traced to the early introduction of apple trees and nurturing by tribal nations who respected their established ties and place-based knowledge of the land on which they subsisted for centuries. [1]

Vancouver, Washington’s “Old Apple Tree” was coaxed into growth by Hudson’s Bay Company Chief Factor John McLoughlin, gardener Billy Bruce and Chief Trader Pierre Chrysologue Pambrun. Fur traders shared stories of how the tree was grown from seed and planted in 1826 – 27. It is the lone survivor of hundreds of saplings that rapidly began to sprout in the Company’s inviting sunhouse.

The son of the farm overseer for Fort Vancouver, George T. Allan, reminisced in 1884 about the excitement the apples generated:

“My father and Mr. Pambrun and [Aurelius] Simpson were together, and they three planted them [the apple seeds] in little boxes. They kept little boxes in the store somewhere where they could not be touched, and put glass over them. I do not know how long they were there. By and by, my father came to me and said, ‘Now, come and see; we are going to have some apples.’ They were all green, and by and by we got apples. …My father used to watch the garden so that no one should touch them. At first there was only one apple on it, and that every one must taste. Lady Douglas will remember that. The second year we had plenty. …The first one was not a red apple, but the second year we had red apples. It was ripe; the only apple on the little tree. It was a great treat, for everybody had just a little slice. There were a good many it had to go round among.” [2]

McLoughlin shared the saplings throughout the Willamette Valley among the French Canadian communities retired from the Hudson Bay Company and eventually among American settler families of the Northwest. What is generally overlooked is the influence of Native American culture on apple tree propagation and popularization along the Columbia River. Only crabapples (Malus Fusca) were native to the Northwest, and they were noted during Captain George Vancouver’s voyage, when Surgeon Archibald Menzies saw wild crab apple trees at Port Discovery, May 2, 1792. Indigenous people from British Columbia south to the Columbia Watershed used the crabapple tree for various purposes. The strong, light-weight wood was useful for tools, mauls, fish hooks and prongs. The tart, hardy apples (really “pomes” because the crabapple, like domestic apples, is a member of the Rose family) were a ready source of vitamin C and if stored in water inside baskets, the fruit softened and sweetened with ripeness. The natural acidity of the crabapple was all it took to preserve it, and traditionally the fruit was simply cooked and mashed. [3]

Near Cape Disappointment during the winter that the Lewis and Clark Expedition camped at Fort Clatsop (1805-1806), Captain Merriweather Lewis remarked,

“… when the fruit has been touched by the frost, it is not unpleasant.” (4)

This was likely fruit of the “Powitch-tree”, Chinook Jargon for the Chinook name of the River Crab Tree, po’wz’ish, or pa’wuis/A PoKE (Phytolacca decandra). [5] The fruit is purple and even smaller than typical crabapples well-known today.

The introduction of a sweeter, commercial apple by the Hudson’s Bay Company was popular among native people and foreigners alike. Few if any native Northwest plants provided the high fructose and fiber content of apples. They were easily stored, dried, cooked, or eaten raw. Cider and apple butter were satisfying apple products, too.

McLoughlin oversaw the development of an experimental garden that rapidly grew to encompass nearly six acres just north of Fort Vancouver’s palisades. Botanist David Douglas had seeds sent from the Horticultural Society in Britain, and McLoughlin’s journals note that three peach trees were received from the Islands of San Juan Fernandez near Chile in 1828. By 1834, American missionary Jason Lee and ornithologist J.K. Townsend remarked on the Fort’s “orchard” burgeoning by then with “apples, peaches and pears.” Jason Lee wrote,

“The orchard is young, and the quantity is so great that many of the branches would break if they were not prevented by props.” [6]

Chinook, Cowlitz and Metis women often married the non-native fur traders and lived in the village with their families outside of the palisades. They performed a great deal of the farm labor, including harvesting the orchards which required hand-picking the fruit and tending the trees. Hawaiians also helped with many of these tasks but “gathering foods” and preparing them for winter was a traditional role of American Indian women.

On May 18, 1845, Francis Ermatinger, manager of the Hudson’s Bay Company commercial “Cowlitz Farm,” near today’s Toledo, WA, boasted in a letter written to Fort Vancouver clerks:

“Sunday. Fine warm day. Musquitoes have made their appearance today for the first time this year. The apples in the garden are now formed, and there is every appearance of a good crop of them. Wild strawberries at table to day, the first of the season.” [7]

In part two of this series, we’ll explore how apple production spread to eastern and central Washington.

[1] The first apple seeds came from the vest pocket of Fort guest LT. Aurelius Simpson, who laughingly promised an attractive female companion in London to deliver them personally to the New World. Simpson was the nephew of Governor-in-Chief George Simpson of the HBC. He sailed from London to Eastern Canada and crossed the continent on foot and in the boats of the fur traders. 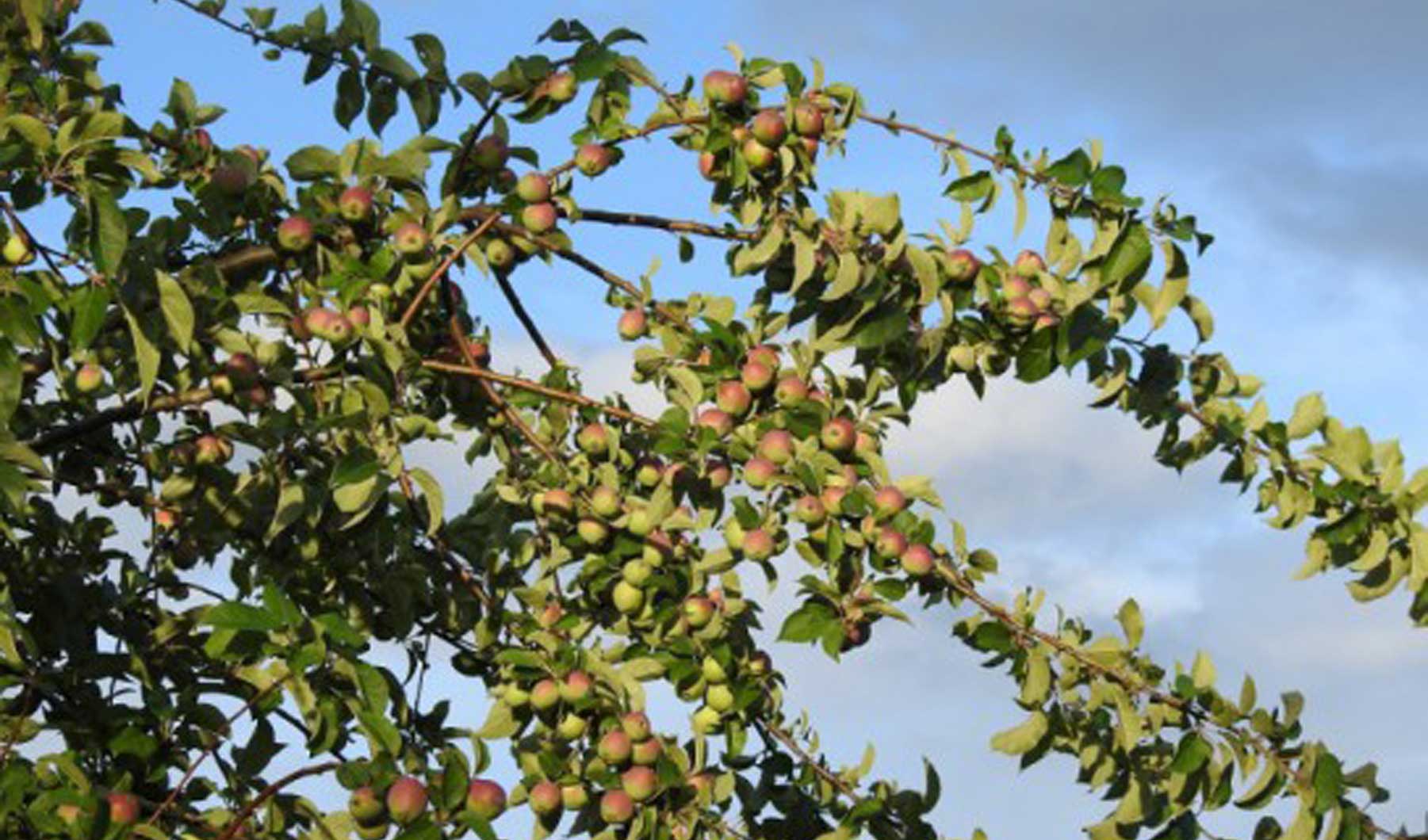