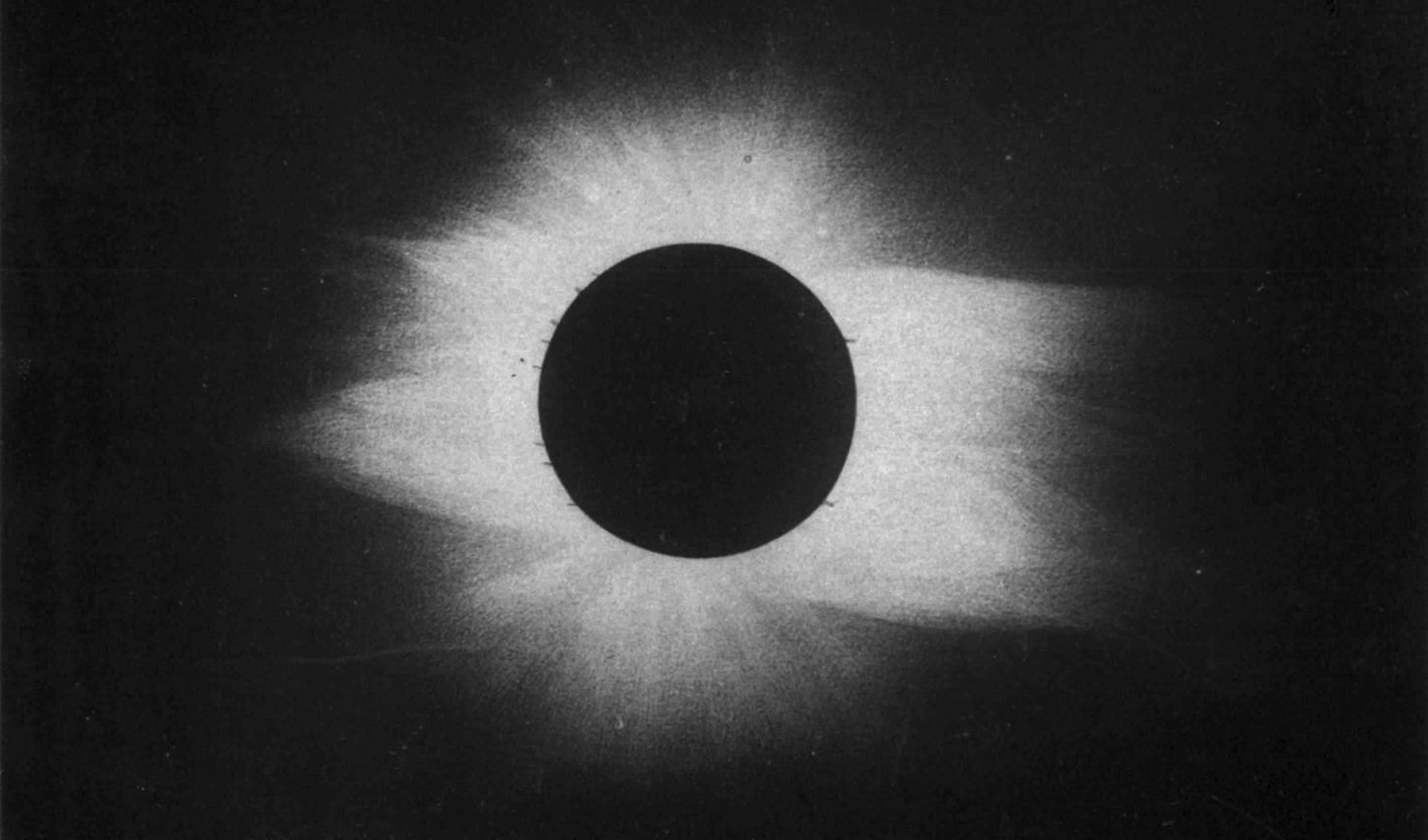 H. S. Pritchett (1891). "The solar corona of January, 1889, from the photographs". Publications of the Astronomical Society of the Pacific 3(16): 155–162. Plate is on unnumbered page preceding the article. Public domain.

Total solar eclipses are believed by some to invoke spiritual dreams and powerful prophetic visions. The total solar eclipse in the West on January 1, 1889 centered over Nevada and California had a chilling effect upon the Native American tribes of America. Wovoka, or Jack Wilson, a Paiute chief known for accurately predicting the weather, experienced a prophetic vision during the total solar eclipse that day. It entailed the resurrection of the Paiute dead and the removal of all foreigners, especially Americans and their works from North America. Wovoka taught that in order to realize this sensational vision, Native Americans must live righteously and perform a traditional round dance – known as the Ghost Dance – in a series of five-day gatherings. Wovoka’s teachings spread rapidly throughout Native American tribes, and his teachings included messages of non-violence. Wovoka warned his followers in all nations not to forget their traditional ways or the spirits of their deceased ancestors.

The movement was widely practiced among the Oglala Sioux people. Dancers formed a large circle with several hundred people participating. The circle went in seven directions – east, west, north, and south, up, down, and most importantly within. [1]

As the Ghost Dance proceeded at Pine Ridge Agency on December 29, 1890, heavily armed soldiers surrounded the Oglala Sioux at Wounded Knee. Most native people carried no weapons. Many were women, children and the elderly.

White Indian Agents, soldiers, and federal officials believed that Wovoka’s movement and the Ghost Dance were antithetical to their views and ideas.  They saw an opportunity at Pine Ridge Agency to rein in the powerful unity of spiritual beliefs practiced by the tribes and to avenge the Battle of the Little Big Horn where Colonel George A. Custer and his men were slain in July 1876.

Despite the freezing cold that December day, the eerie Ghost Dance continued, and the determined dancers perturbed the soldiers. One shot rang out and then another. The native dancers – 146 men, women and children – all “lay in red in the white snows.” [2]

The army unit dispatched to the site, the 7th Cavalry, was under the command of Colonel James W. Forsyth. Forsyth served with Custer on General Philip Sheridan’s staff throughout the Civil War, and he commanded the 1st Cavalry in the Department of the Columbia during the Bannock War of 1878. He rapidly rose to the rank of Brigadier General after Wounded Knee and by 1895, he was commanding general of the Department of California (including Nevada).

While most government officials believed Ghost Dancing was at an end, for many Native Americans it was simply forced underground. Wovoka continued to teach and practice his spiritual beliefs but the unifying nature of his teaching ceased. Wovoka died many years later, in 1932.