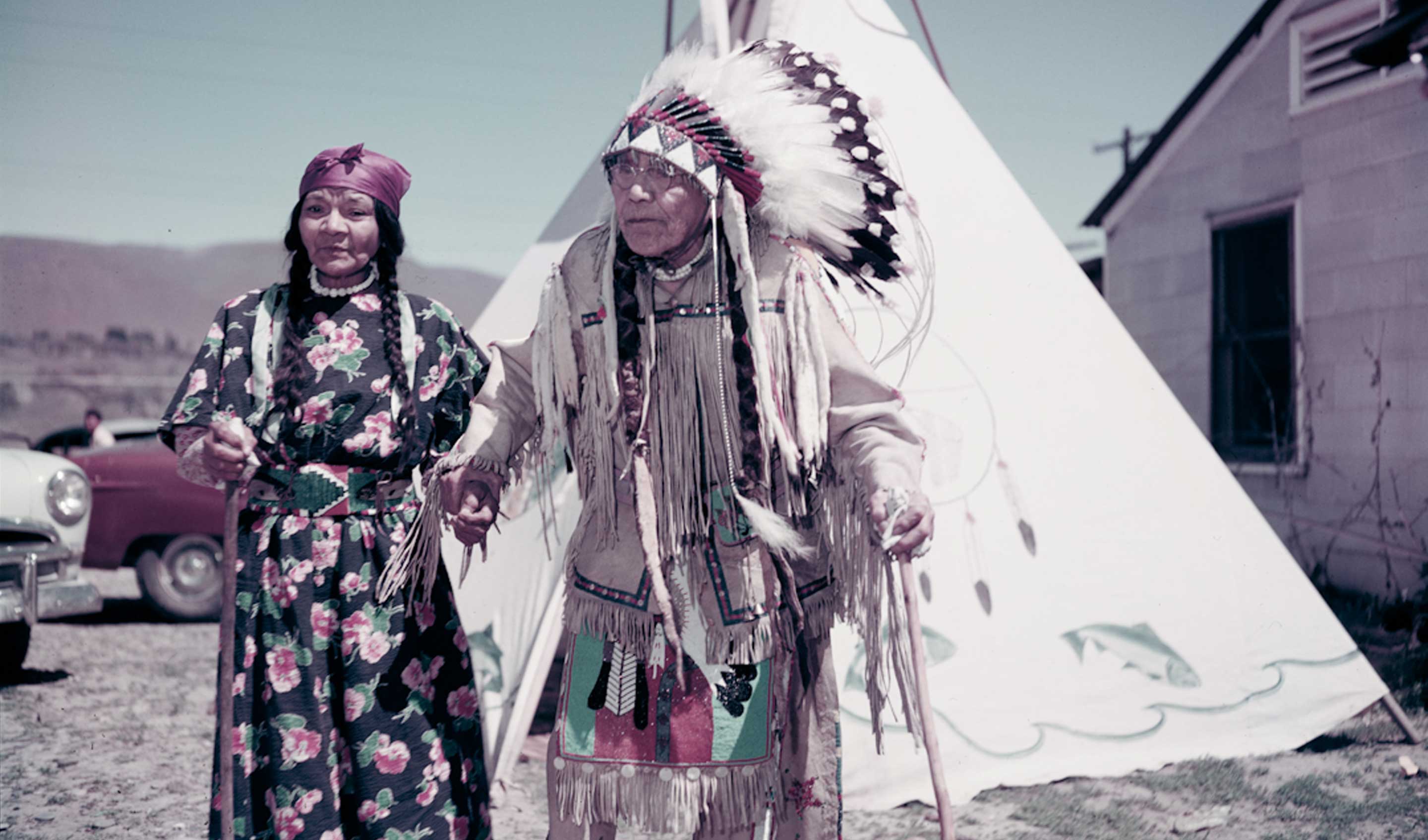 The last public appearance of Chief Tommy Thompson, photographed here with his wife Flora, as they were arriving in Celilo for the Feast of the First Salmon on Saturday, May 11, 1957. Chief Thompson, age 102, came to "say a few words of farewell" to the salmon and the falls at the annual festival being held just two months after Celilo had been permanently submerged by the backwaters of The Dalles Dam. After the ceremonies and an overnight stay in Celilo village, he returned to his room at the Hanby nursing home in Hood River. According to newspaper accounts, on the night of his return he had nightmares, which caused him to climb over the guardrails of his bed, when he fell and fractured his right hip. He was taken to the Hood River Memorial hospital where surgeons placed a steel pin in his hip. The next year's Salmon Feast was held in Tommy Thompson's honor, but the elderly Chief never again personally attended. He lived two more years and passed away on April 12, 1959. 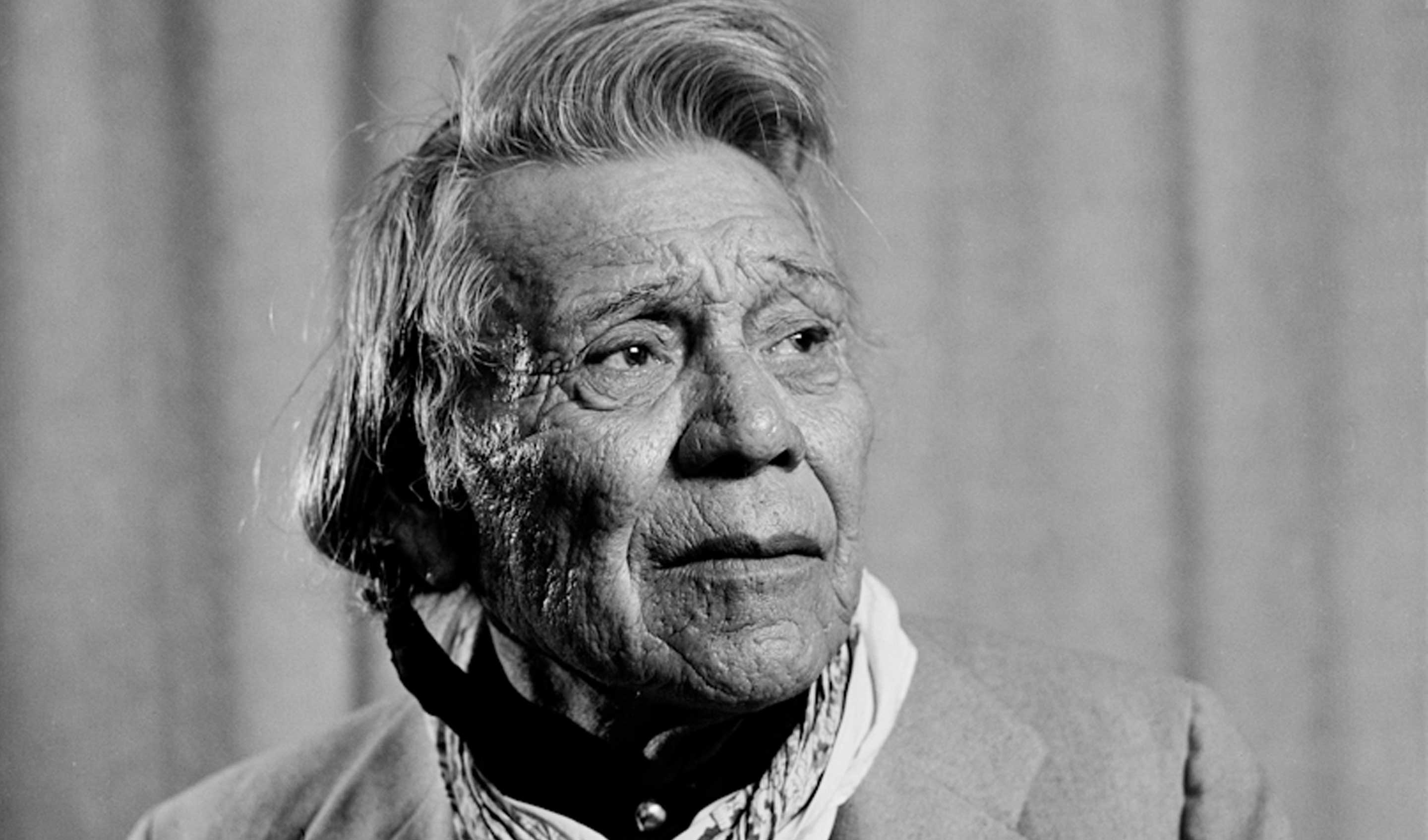 Chief Tommy Thompson of Celilo Indians. April 19, 1945. Chief Thompson and his grandson Otis Anderson came to Portland to make final arrangements for the Feast of the First Salmon. He received nearly $500 in donations to help with the annual event to be held that weekend. It was very rare for Thompson to wear a three piece suit and this writer has never seen another one. 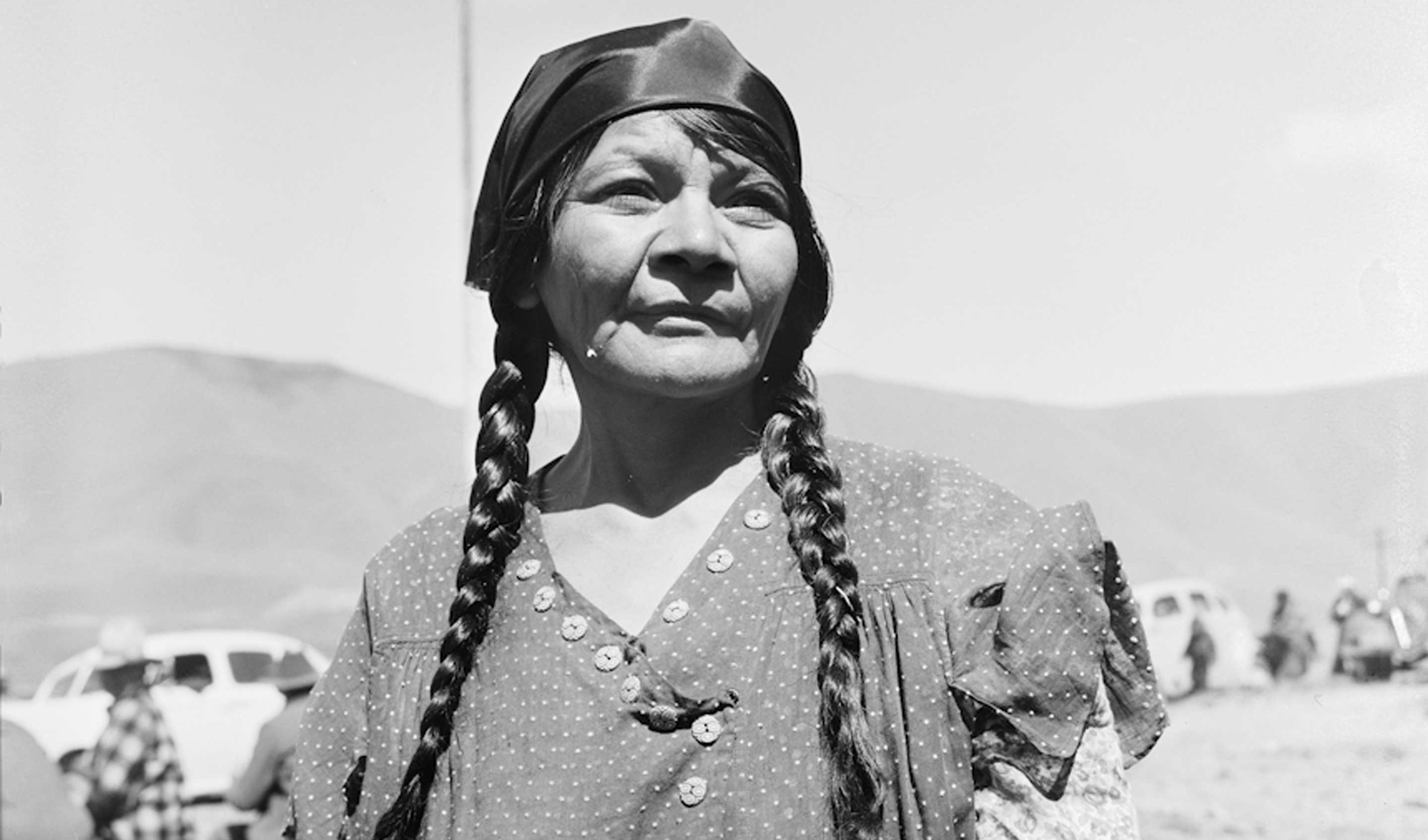 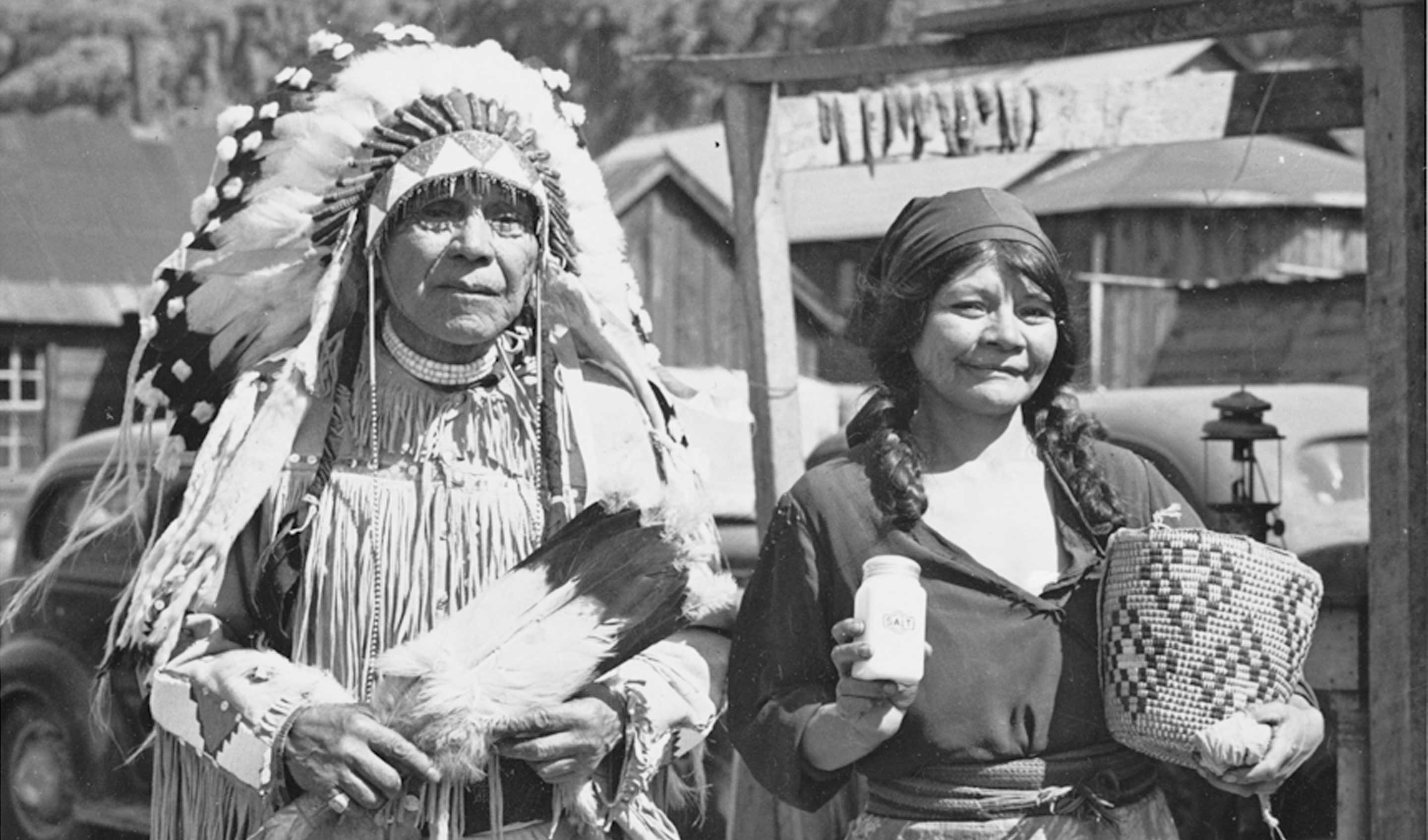 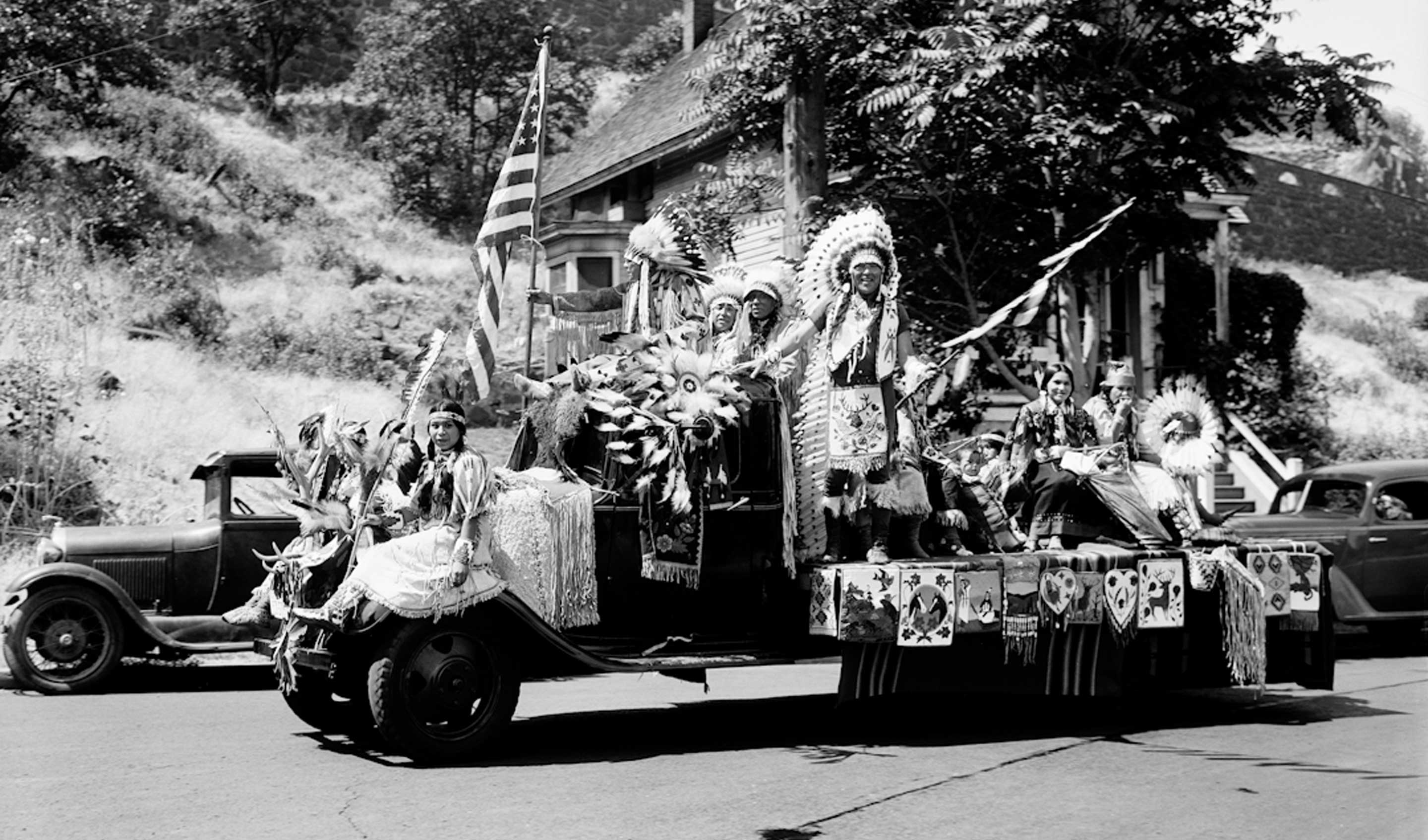 Native Americans on Parade float. Old Fort Dalles Frolics Parade. Thursday, August 29, 1940. Chief Tommy Thompson is holding the American flag and his son Henry Thompson is standing behind him. The parade was the annual Old Fort Dalles Frolics. The location is in The Dalles, on East 3rd at Monroe, looking south from the NE corner. The house in the background is now gone. Source: scan of 5x7" original negative 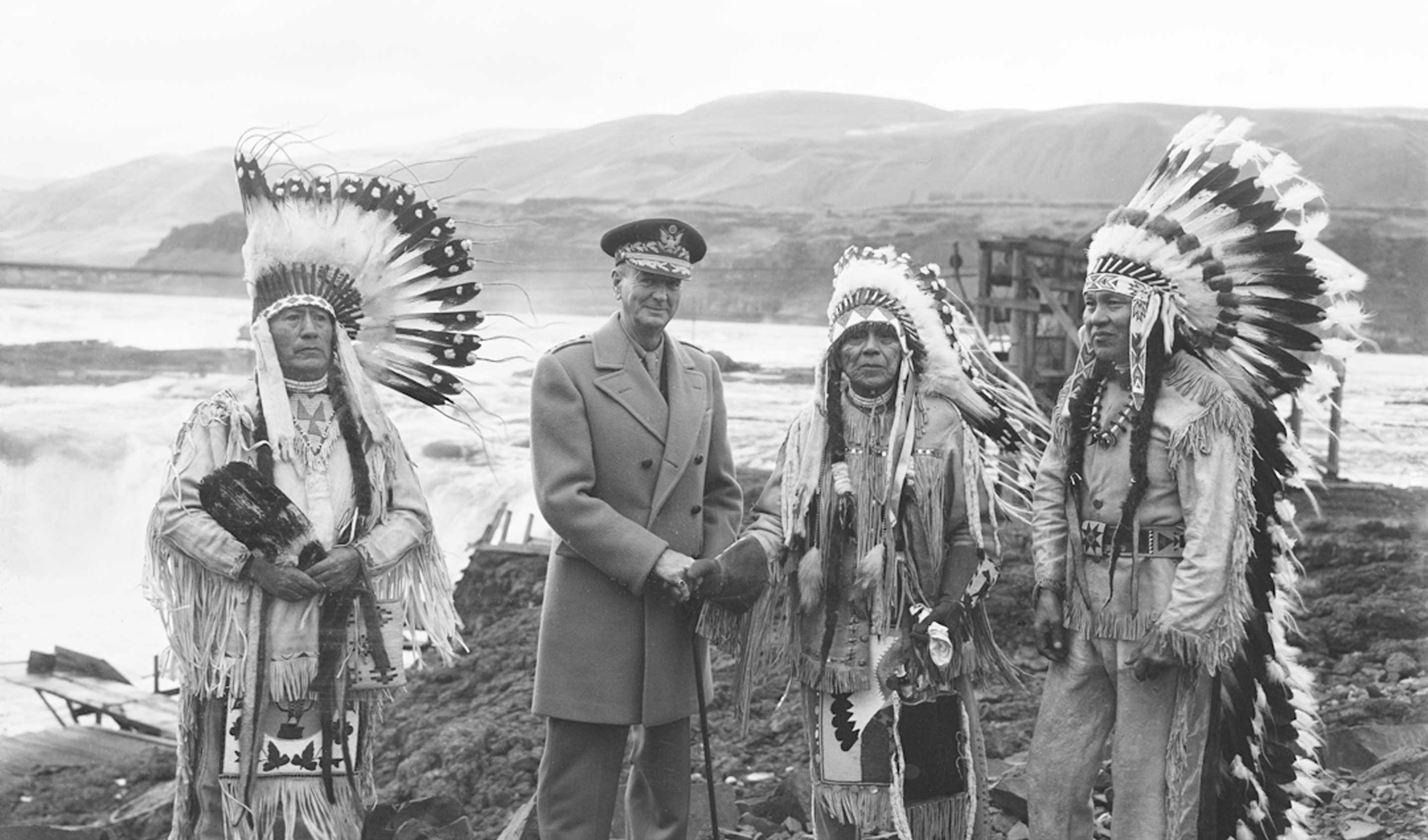 General Wainwright meets Celilo Indians, November 15, 1945. Wainwright was a four star general who had recently been liberated from thirty nine months of captivity as a Japanese prisoner of war. At the time, he was America's most famous hero of the war, having endured the Battan Death March and torture in captivity. He was making a national tour of appearances to promote the war bond drive. For personal reasons, he requested a detour from his itinerary so he could visit Celilo Falls. After his visit, he resumed his tour and made a speech in The Dalles, then traveled to Hood River and on to Portland for more speeches and a national radio broadcast. (left to right) 1: Charley Quitoken (Quetukhin, Quittacken, Quitalkin), 2: General Wainwright, 3: Chief Tommy Thompson, 4: Henry Thompson (son of Tommy Thompson). Celilo Falls in background. 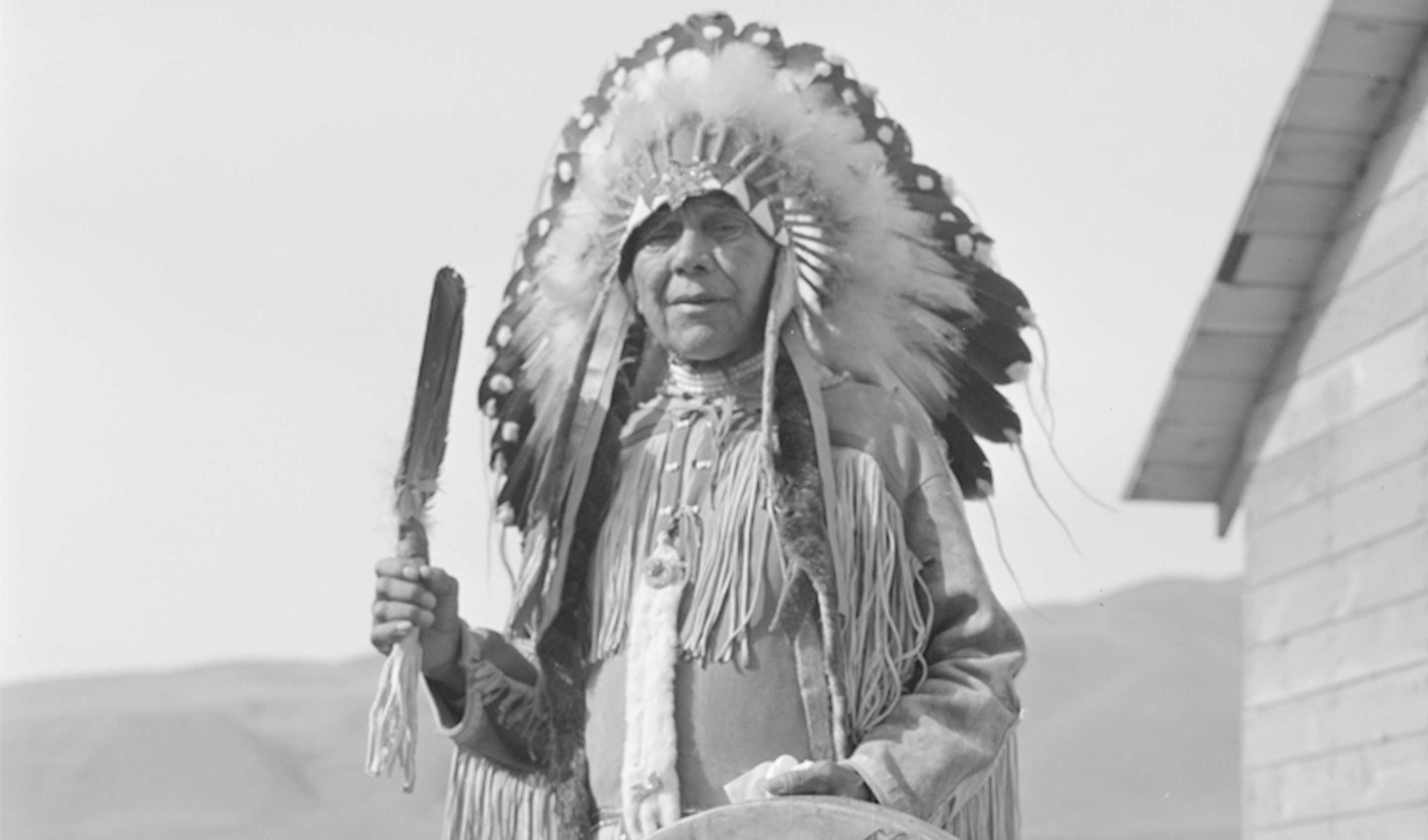 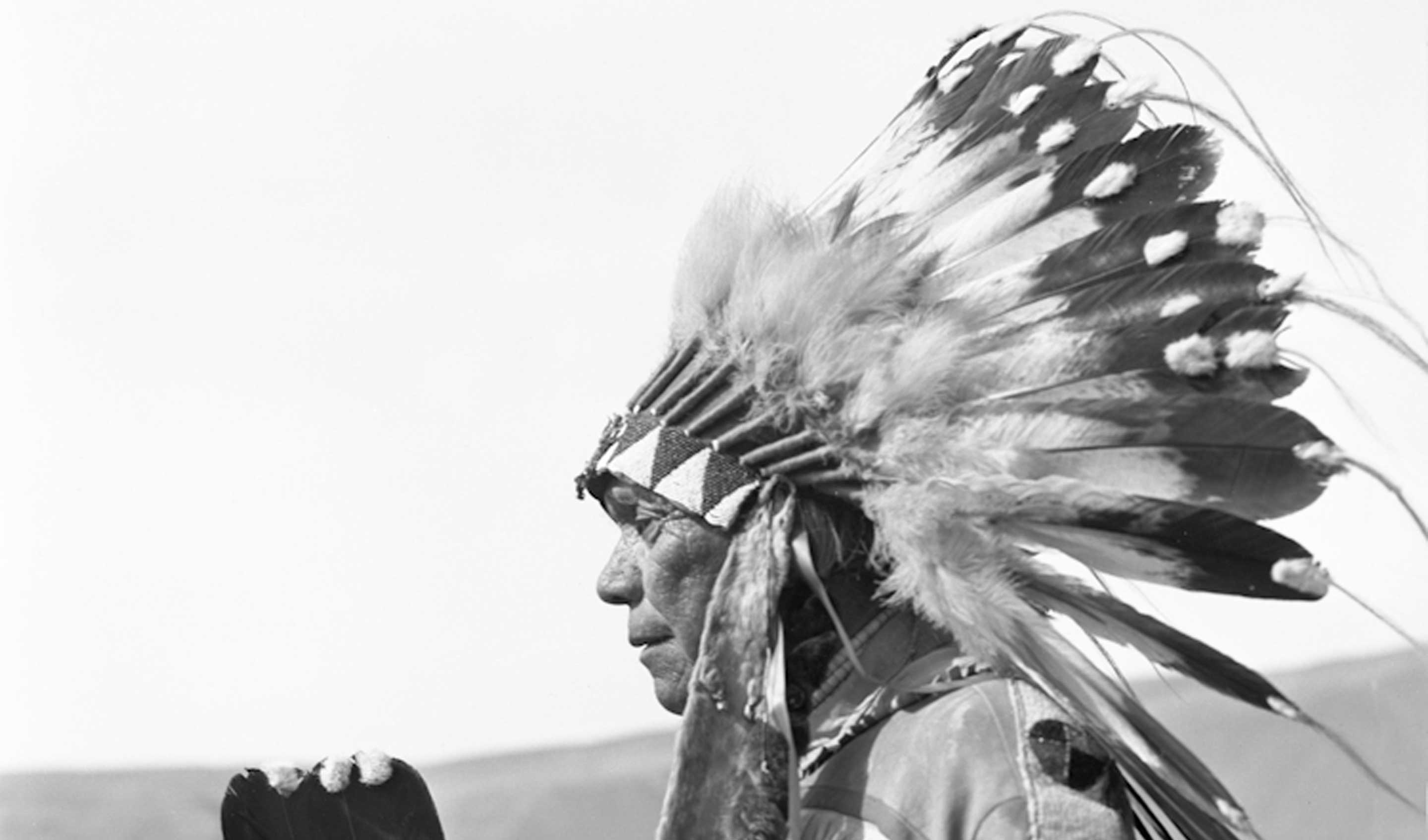 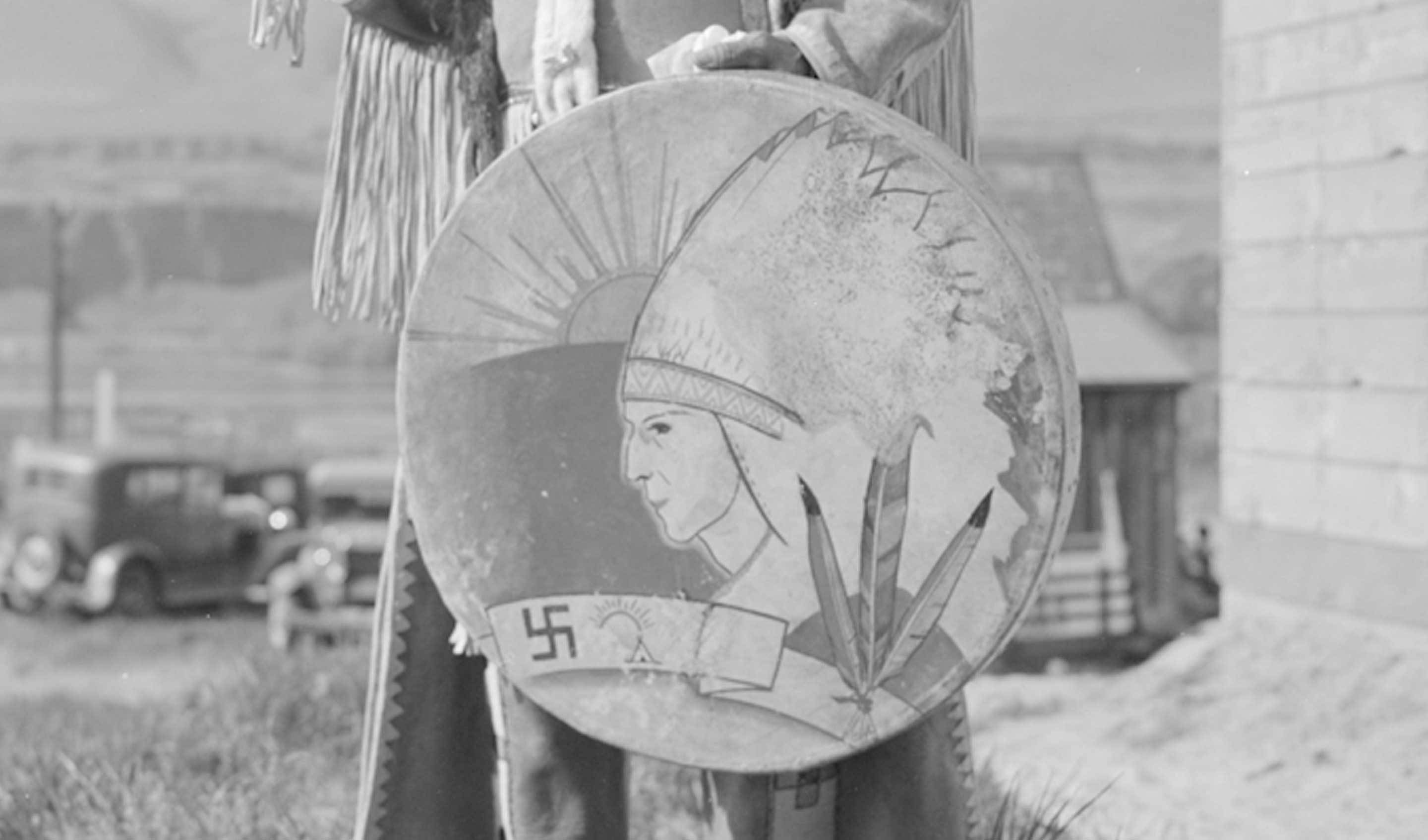 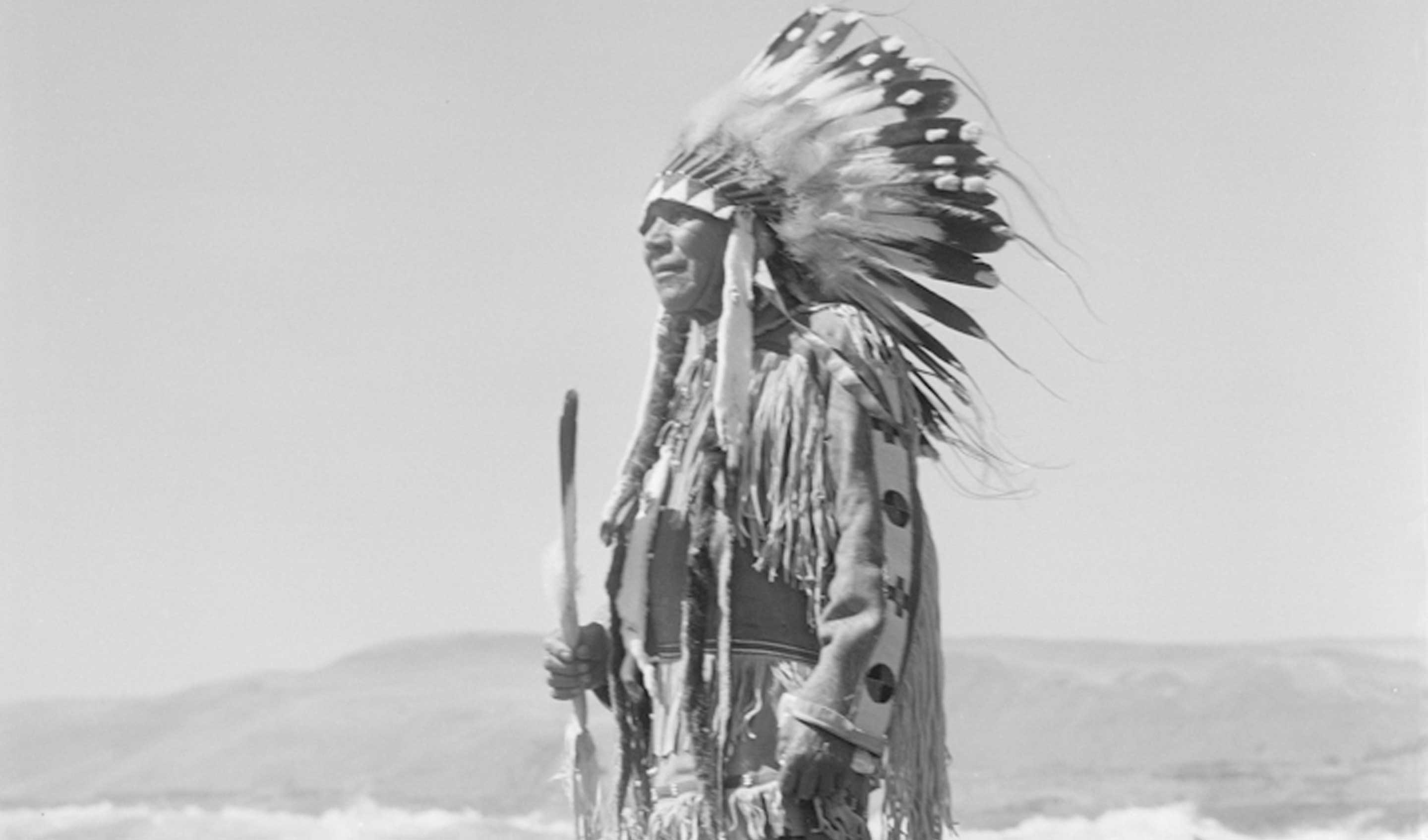 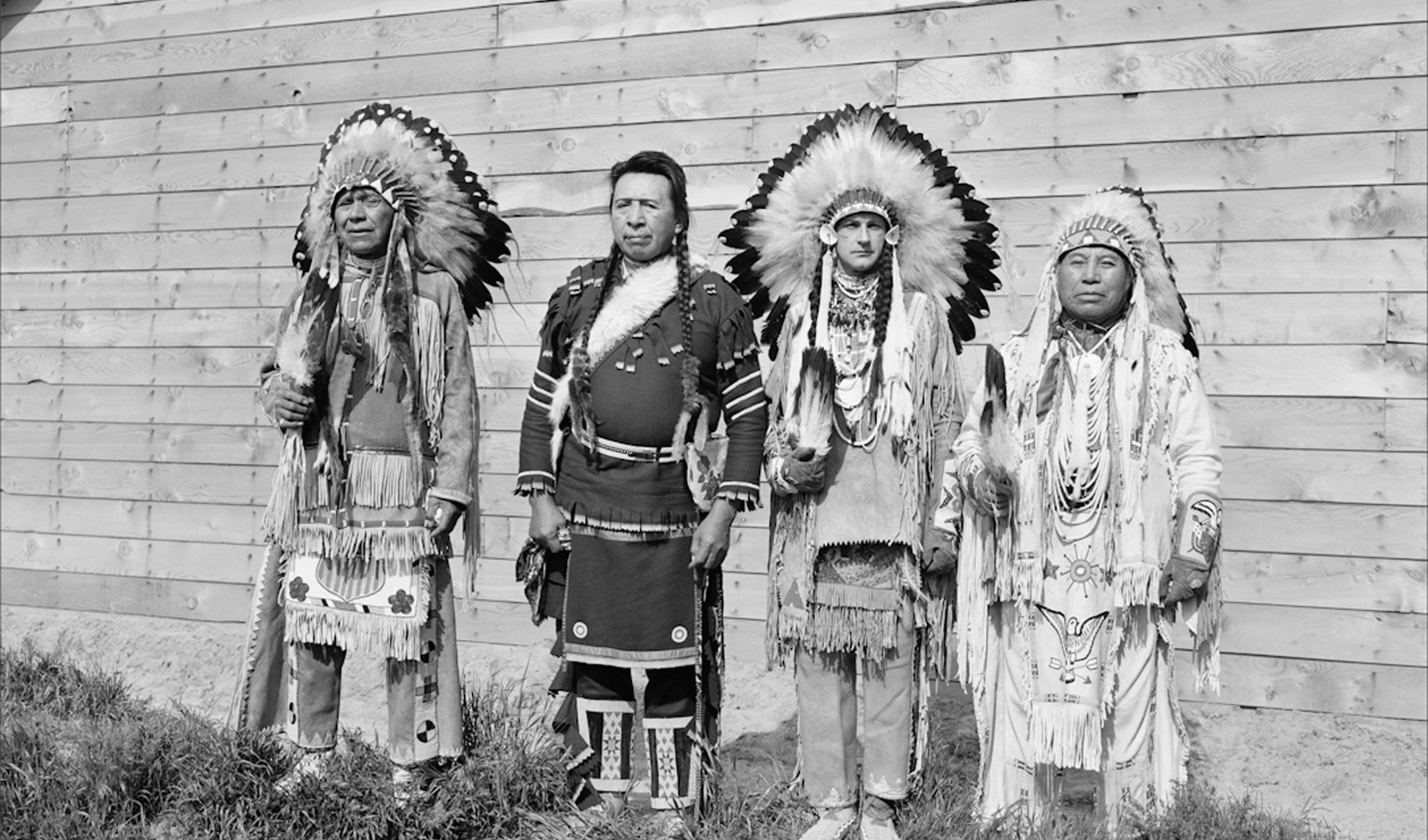 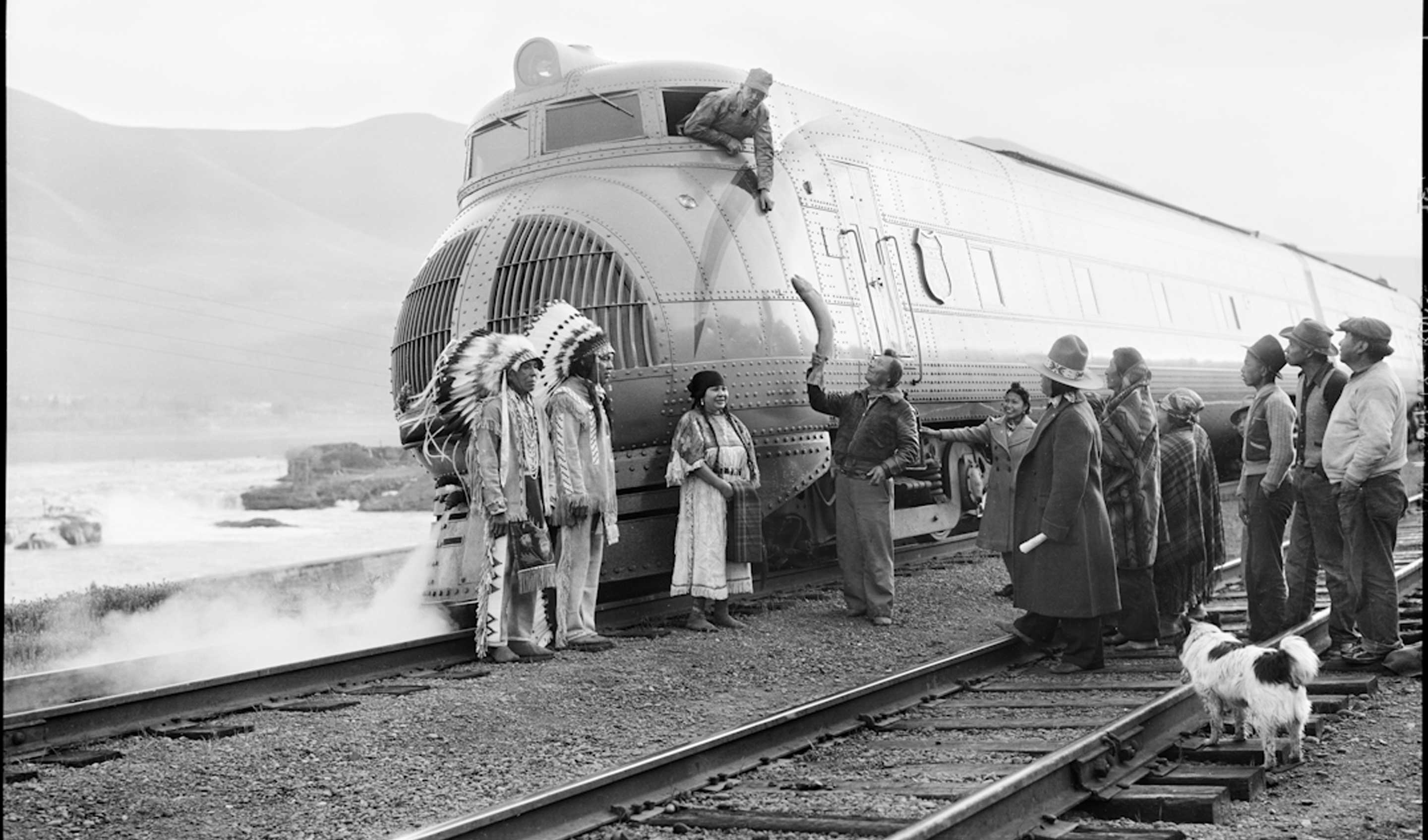 People from Celilo Village pose with the Union Pacific Streamliner train at Celilo Falls. April 1940. An Indian is handing a salmon up to Streamliner engineer, whose window has been removed from the train for the purpose of photographing. Celilo Falls is in the background. On left is Chief Tommy Thompson, son Henry Thompson, daughter Ida Thompson, son-in-law Jimmy George (with fish), Flora Thompson (wife of Chief Tommy Thompson). Other identified Indians on the right are (from right to left) Joe Skahan, Louis Ike (father of Freddy Ike), the rest are unidentified. Train engineer is Tom Rumgay (died 1942 at age 52) The photos are from a Union Pacific photo assignment. The first known publication was in the Oregon Journal on May 12, 1940. This Streamliner was the "City of Portland", engine #M10002, an articulated streamliner introduced in 1935 and replaced in 1939 by a train streamliner. Until 1946, only one Streamliner worked the Portland to Chicago route at any given time, and the original Streamliner was brought out of retirement for this photo shoot. 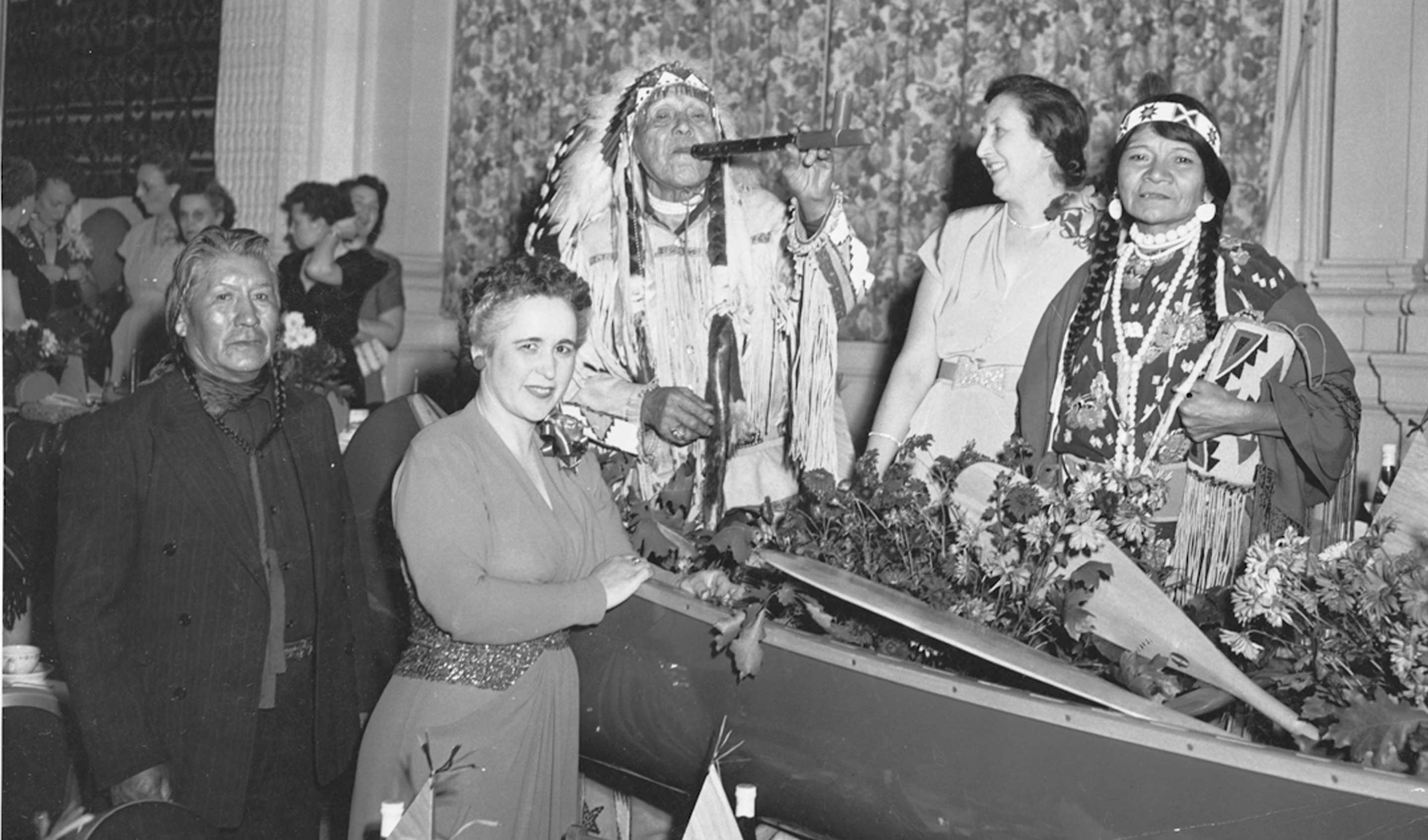 The Oregonian reported “(the) Appearance of a real Indian Chief, Tommy Thompson of the Wy-ams at Celilo, lent additional color and excitement to the 29th annual banquet of the Fifty Fifty club of business women.” Chief Thompson was in Portland to voice his opposition the forced relocation of Celilo Indian village. By the fall of 1949, the Army had moved war-surplus houses to the land south of the highway to replace the area where the Indians were presently living, that would be flooded by the backwaters of The Dalles Dam. Chief Thompson was persuaded to appear at this luncheon by the featured speaker of the banquet, Martha Ferguson McKeown. A Hood River author, she had long been an advocate of Celilo and had recently returned from Washington DC where she delivered Chief Thompson’s petition of protest. McKeown later went on to write two books about Celilo Falls. Thompson spoke about the “heartbreak” of the village relocation, Charlie Quackenbush (right) and author KcKeown (center) spoke about how the Army plans would destroy their way of life. That day the Indians also appeared before the Portland Chamber of Commerece to ask for support opposing Army planners. October 18, 1949, Multnomah Hotel. 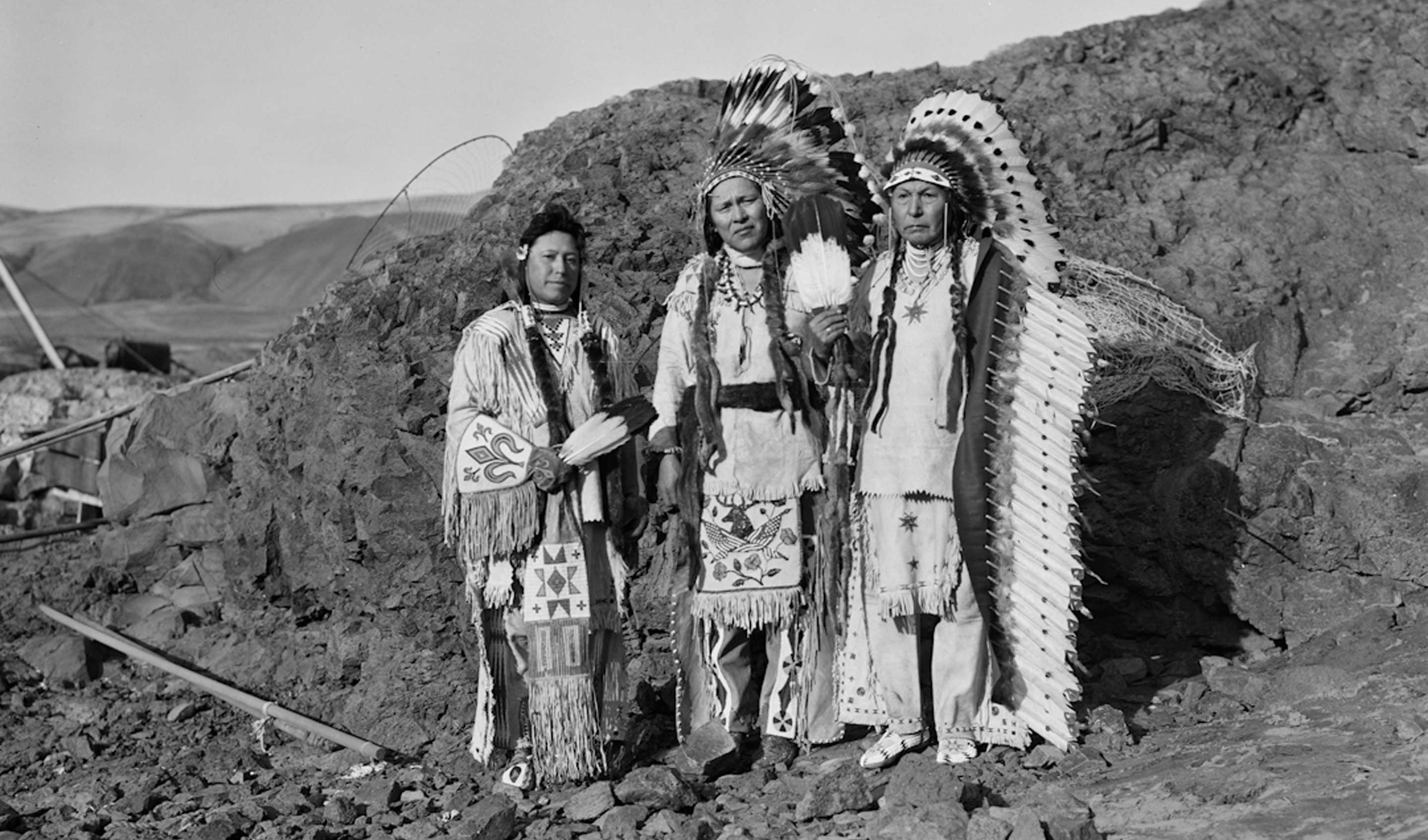 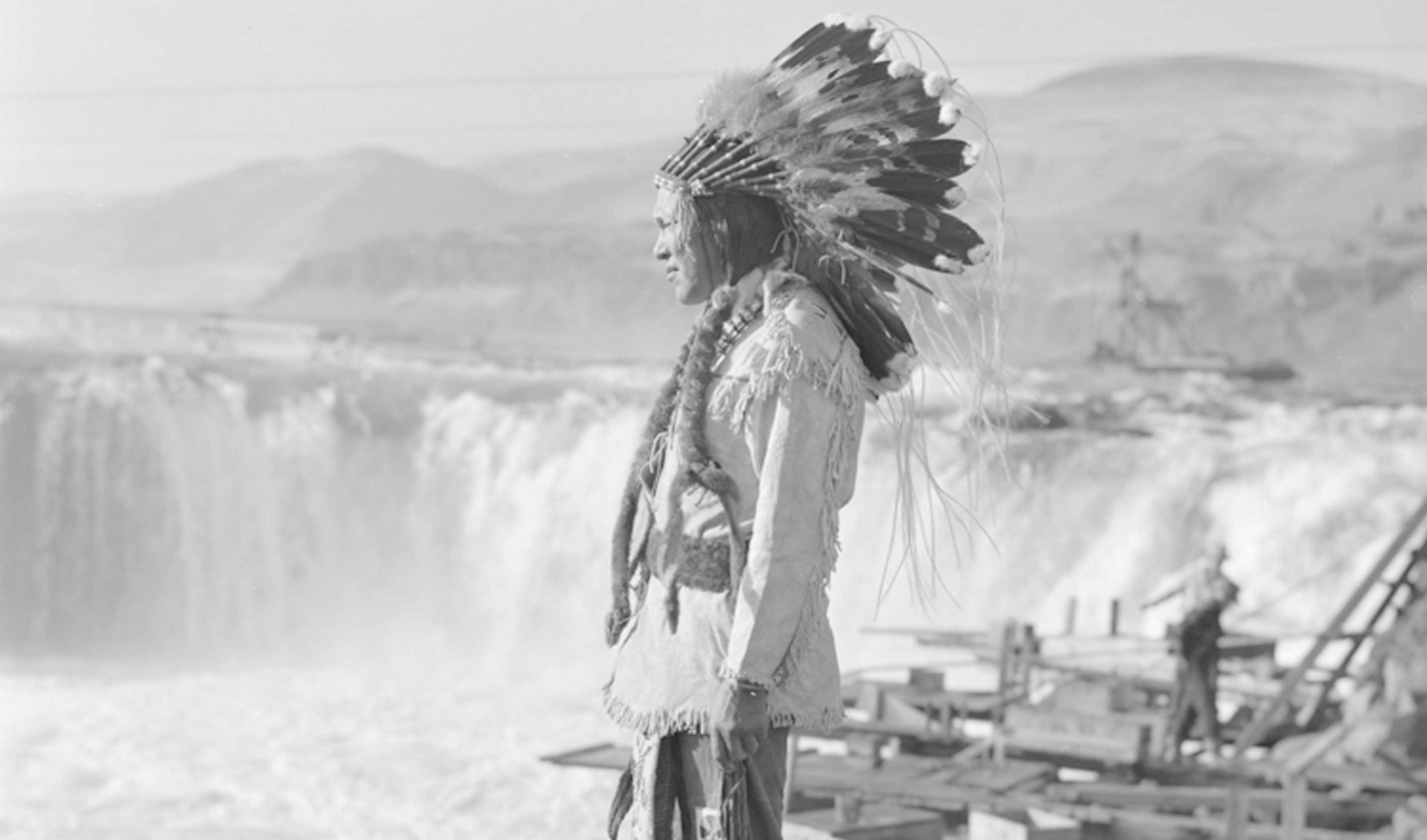 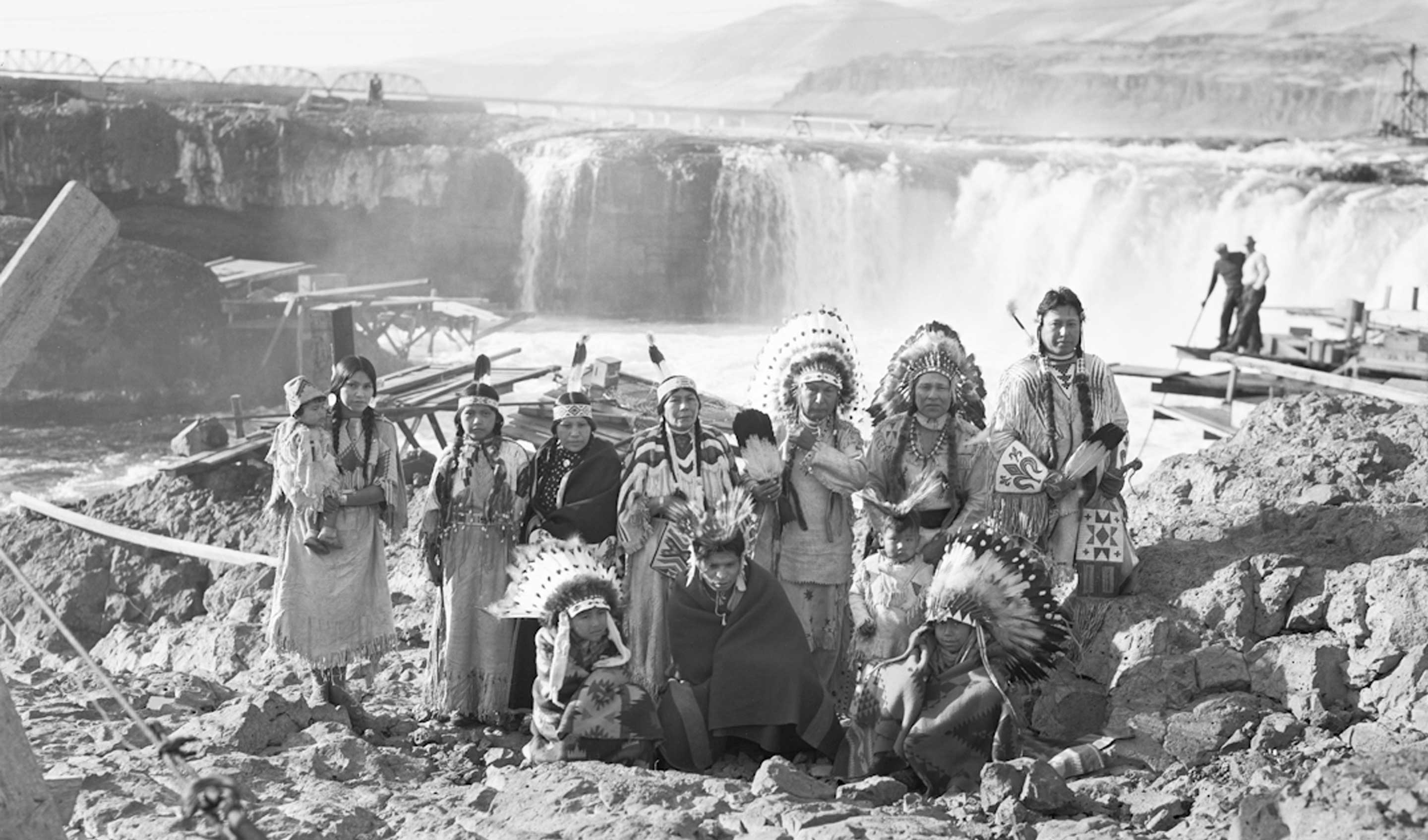