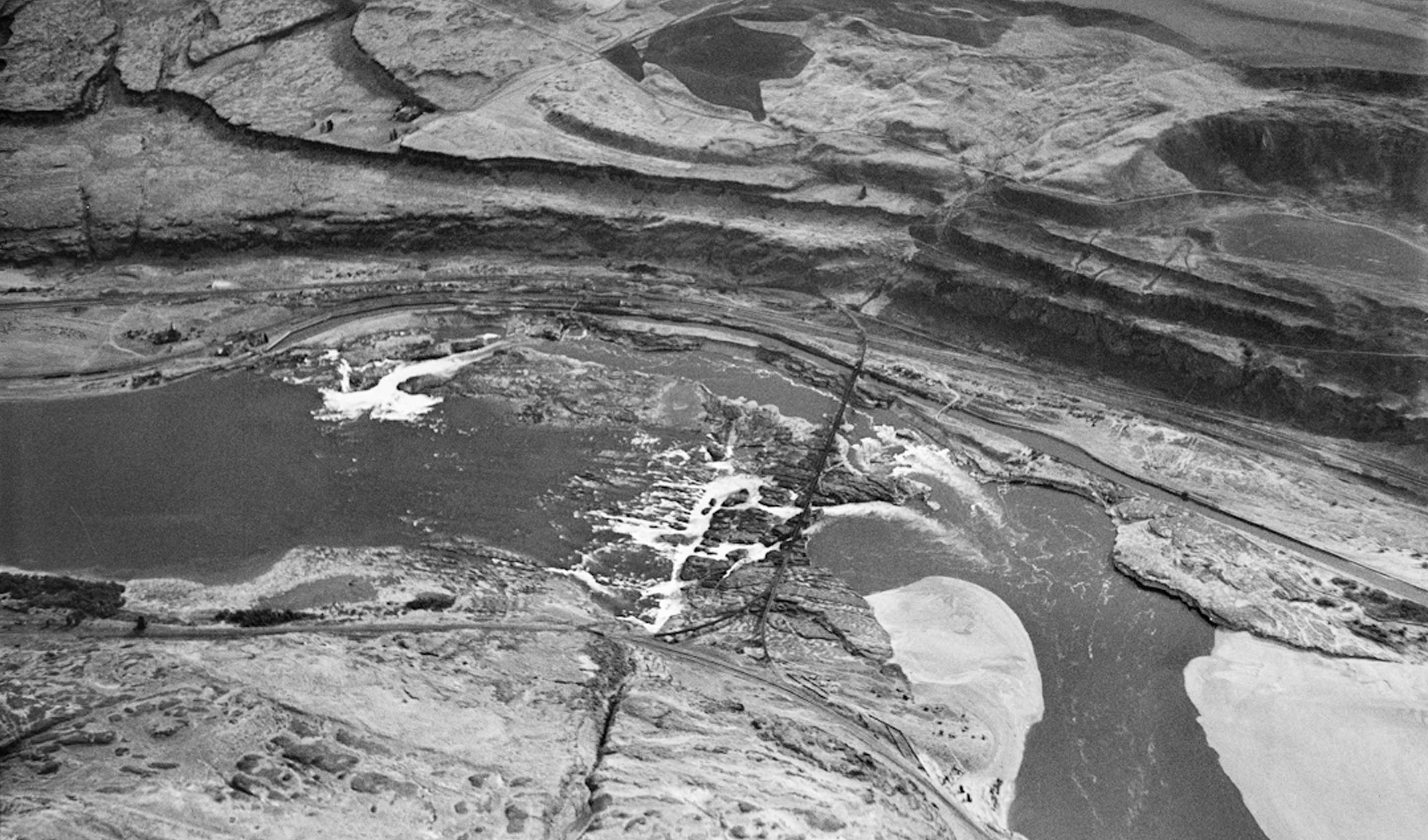 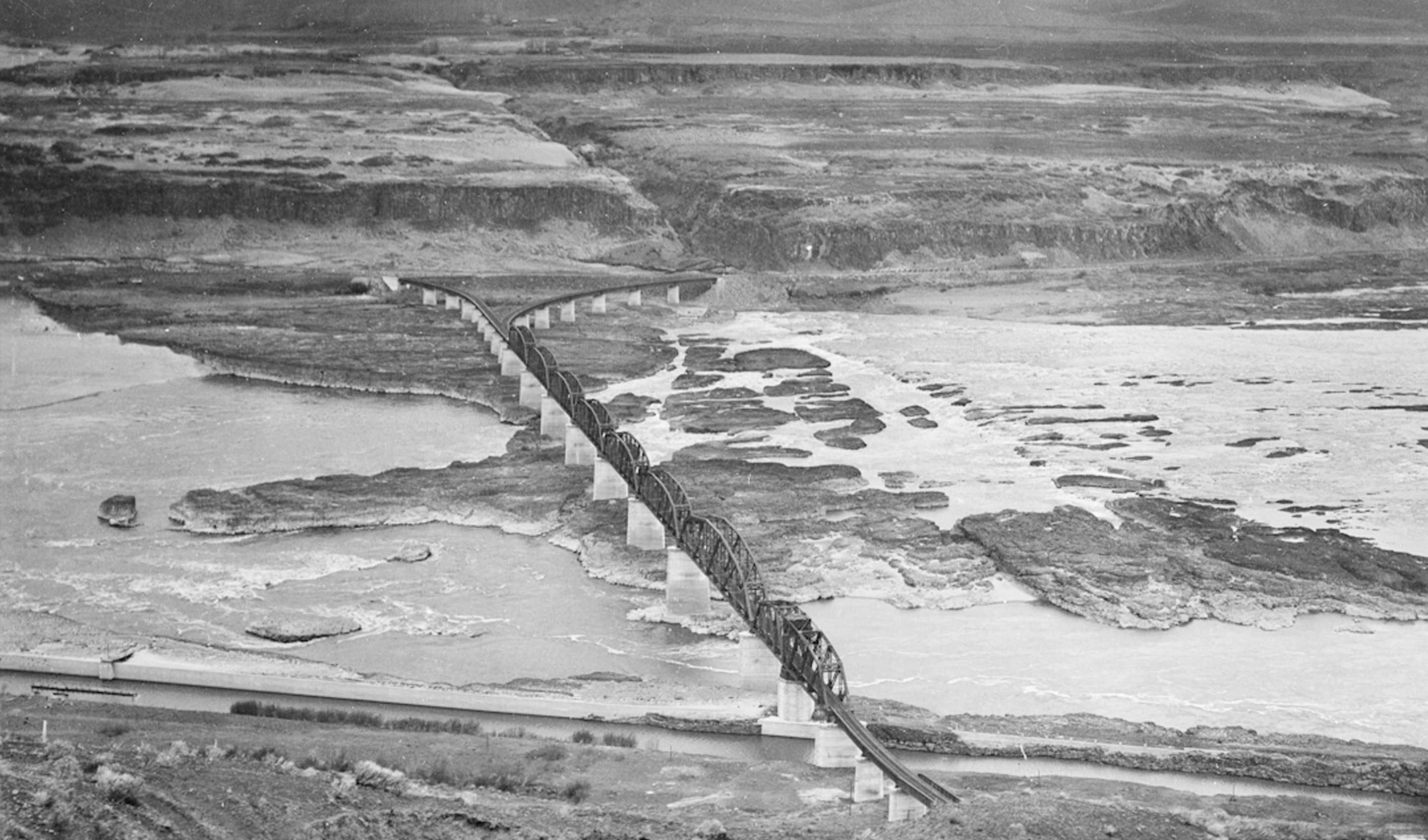 The Oregon-Washington Railroad & Navigation Company bridge, commonly known as the Oregon Trunk bridge at Celilo, was built in 1911 and opened on January 5, 1912. The large island on the Oregon side is Kiska and the one behind is Hobo island. Indians got to these islands by walking on the railroad tracks and climbind down ladder rungs on the bridges' support pillars. After the 1930s, cable cars were installed during the fall season to get to Kiska. 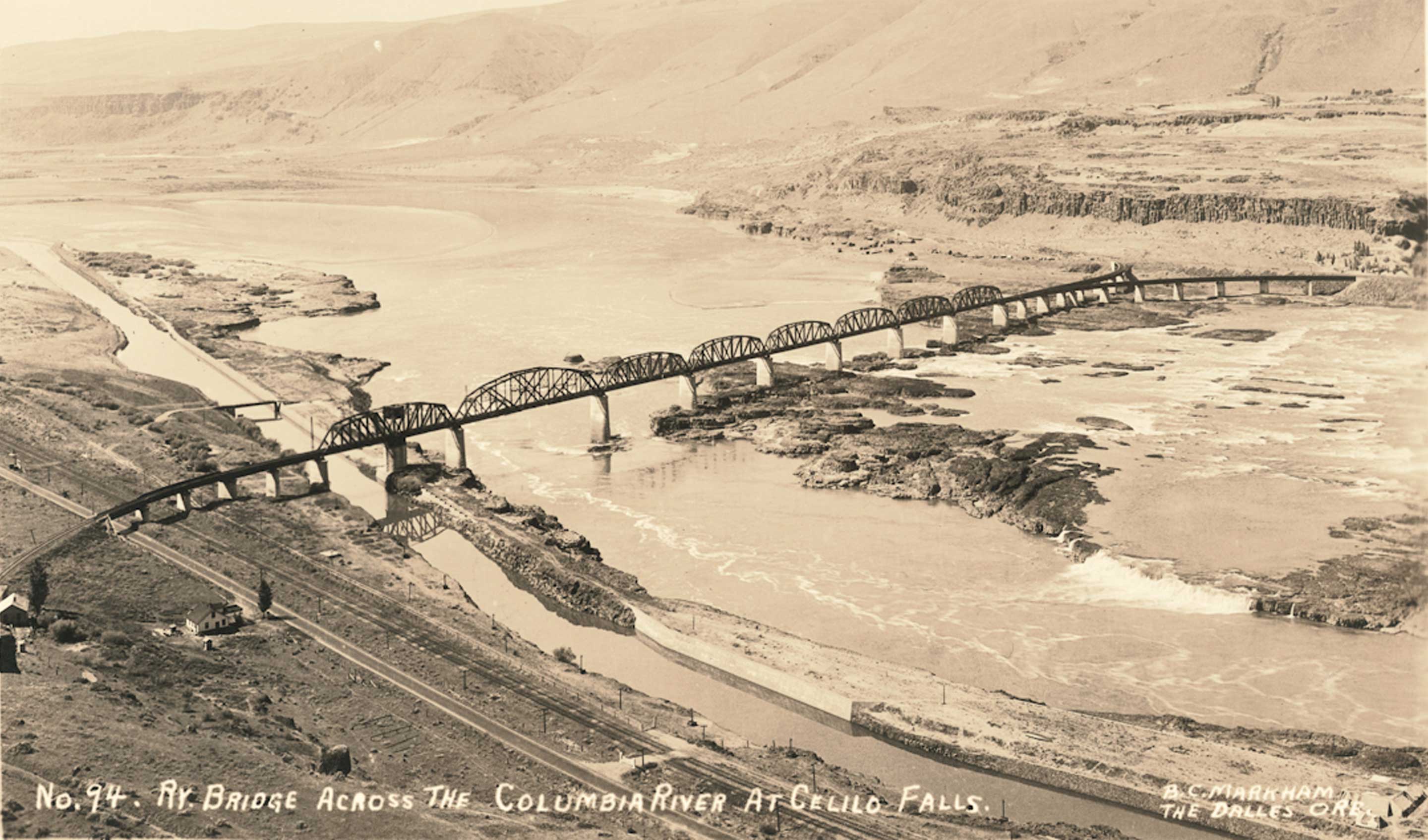 Oregon Trunk railroad bridge and Celilo falls, about 1928. The large island in the center is Kiska, one of the four larger islands that comprise Celilo falls. 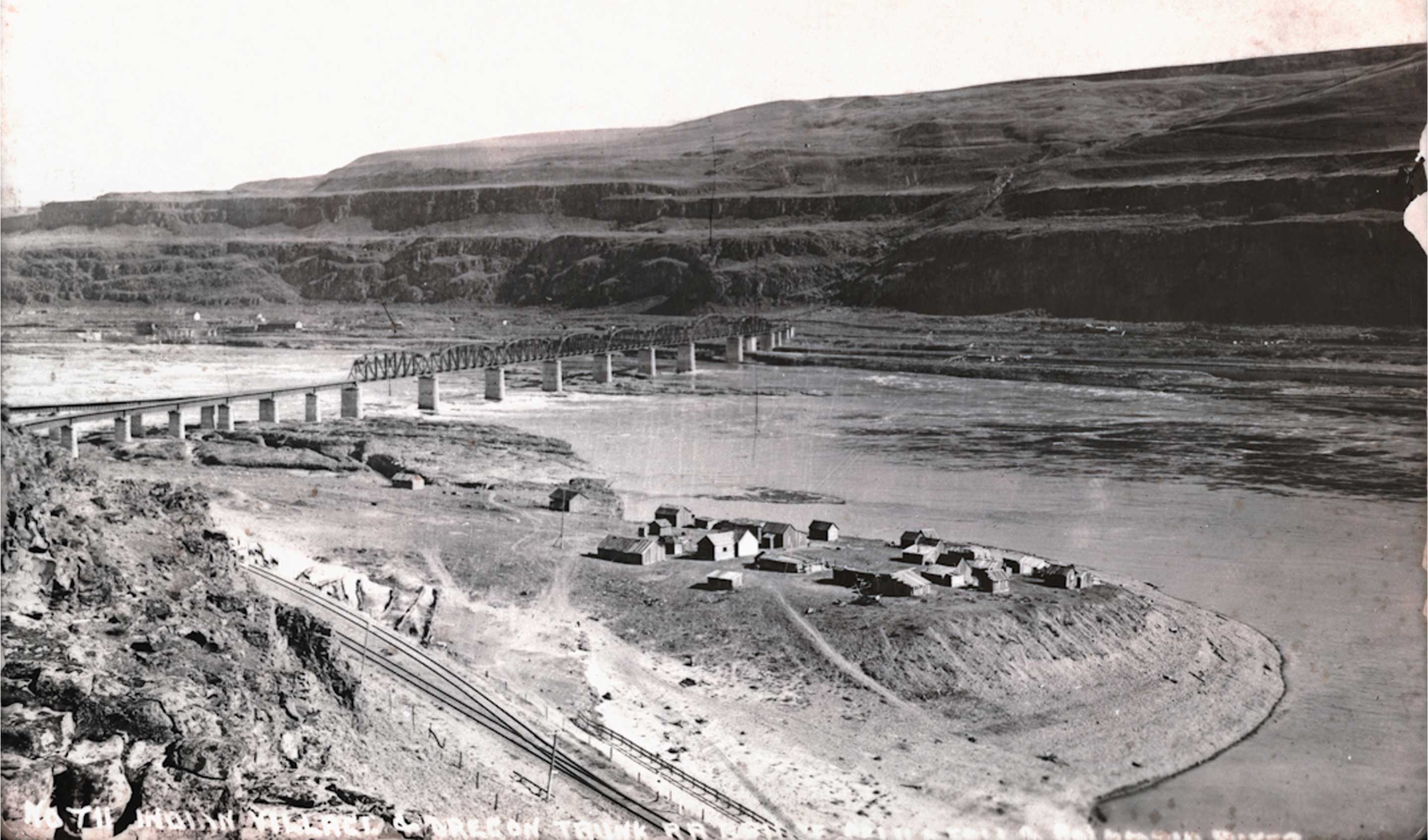 The Indian community of Sk'in (Skien) on the Washington side of the Columbia river, downstream from the railroad bridge and Celilo. It was next to a settlement called Fallbridge, which name was changed to Wishram in the 1920s (Fallbridge / Wishram is not the location of the ancient Indian village called Wishram, Wish-ham, Wishxam, nine miles downstream at the head of The Long Narrows, presently Columbia Hills State Park and formerly Horsethief Lake State Park). Celilo is faintly visible on the opposite bank, to the left of the railroad bridge. In this photo, the Oregon Washington Railroad & Navigation Company bridge, commonly known as the Oregon Trunk bridge at Celilo, is finished, it was built in 1911. 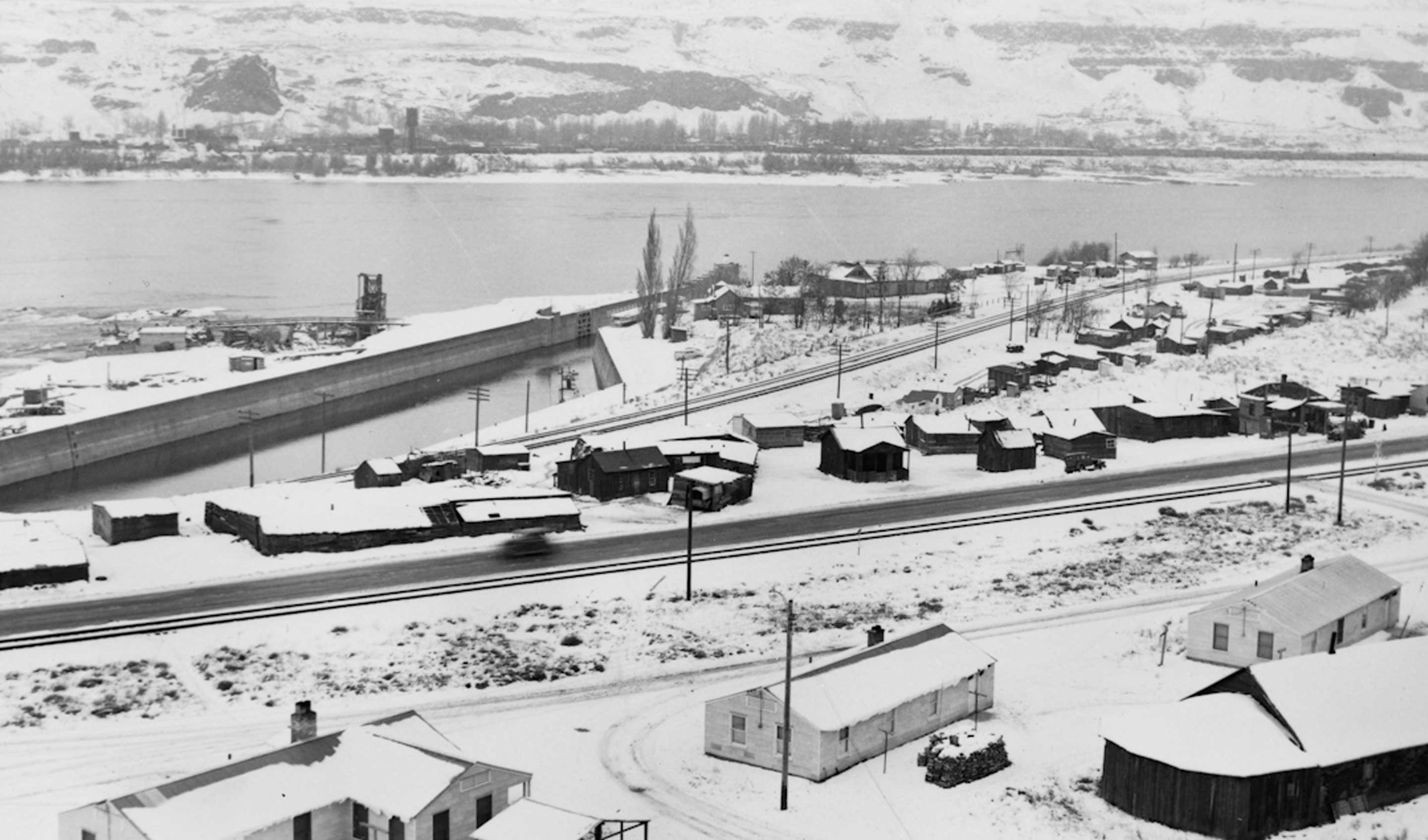 Bird's-eye view of Celilo after a snow. The new houses that were built in April 1950 are clustered around the old longhouse. Chief Thompson's house is on the left. The shed in front of it contains enough cords of firewood to last a winter. The village is bisected by both the Oregon Trail Highway 30 and the Oregon Trunk railroad tracks. The buildings on the north side of the tracks mostly remained until 1956, when the site was being prepared for submersion by the backwater of The Dalles Dam. 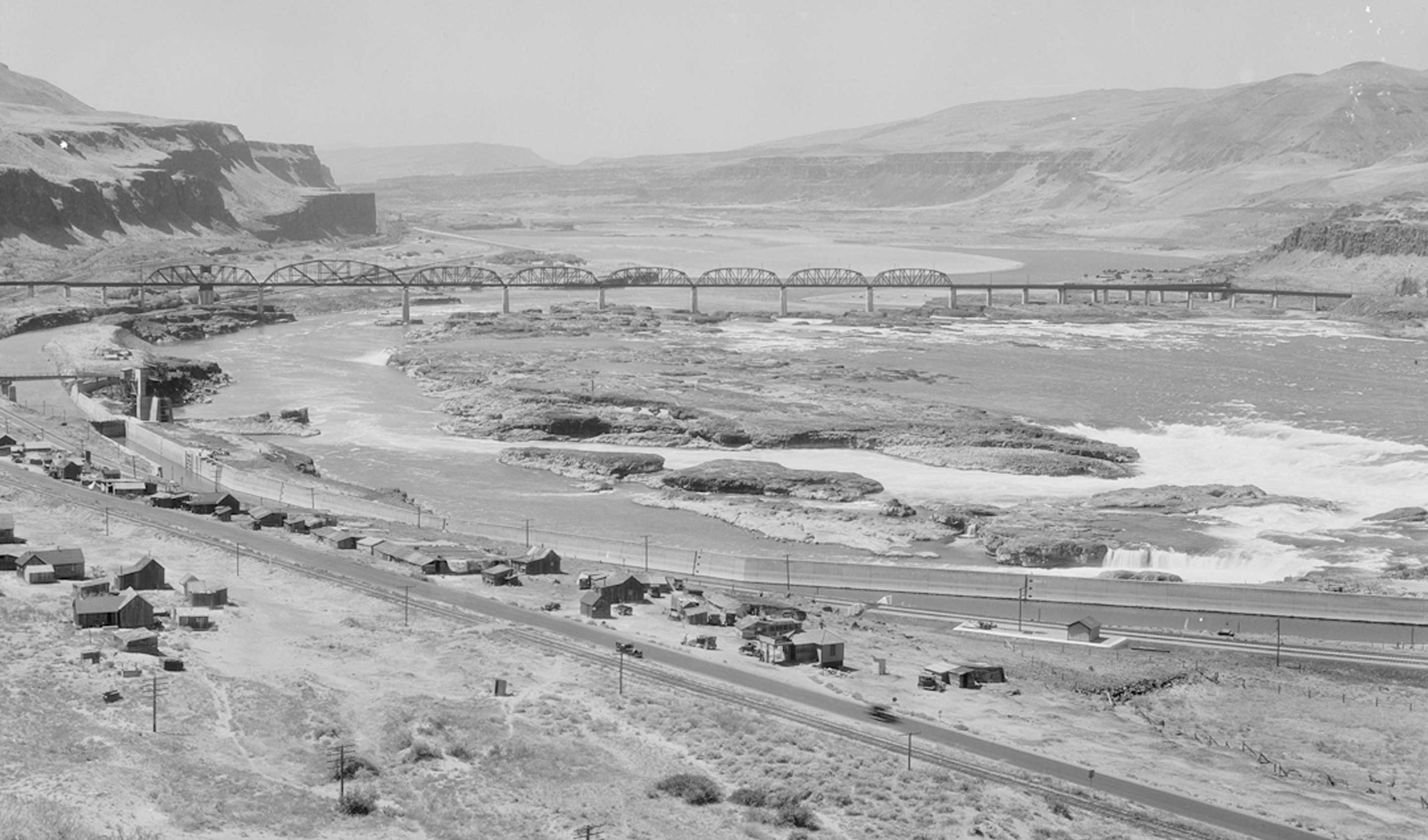 Bird's-eye view from the rimrock above Celilo showing the falls. Oregon Trail highway 30, Celilo Indian village, and Oregon Trunk railroad bridge. The Shell station on the right is the Tumwater Auto Service Station, owned by the Seufert brothers, had been recently built. About 1930. 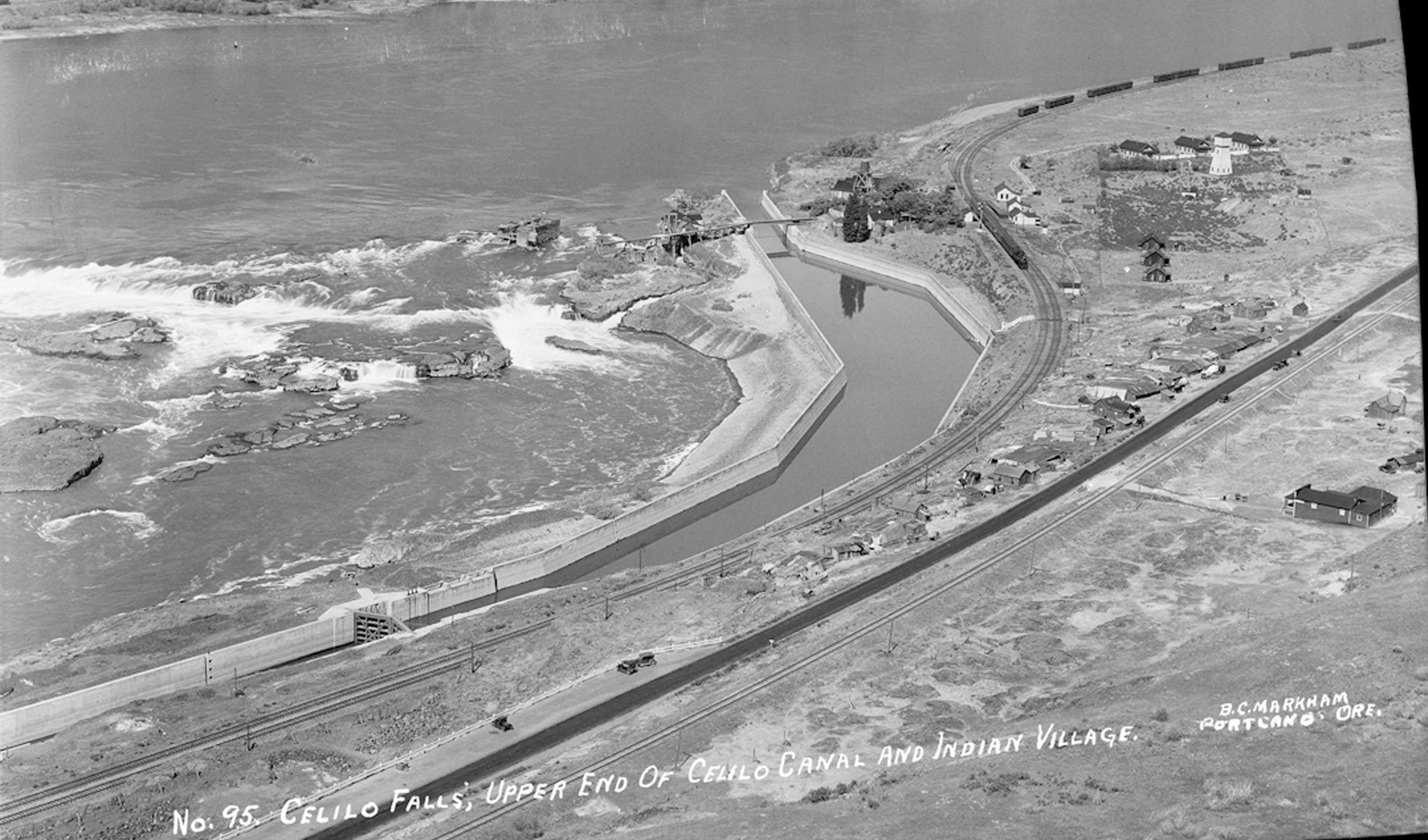 Bird's-eye view of Celilo village about 1928. The gas station on the east end of town hasn't been built yet. The road is paved but the white line hasn't been painted yet, that happened in 1933. On the lower left is the 400 foot parking space that Frank Seufert donated in May 1925. In the lower right is the Celilo General Store. 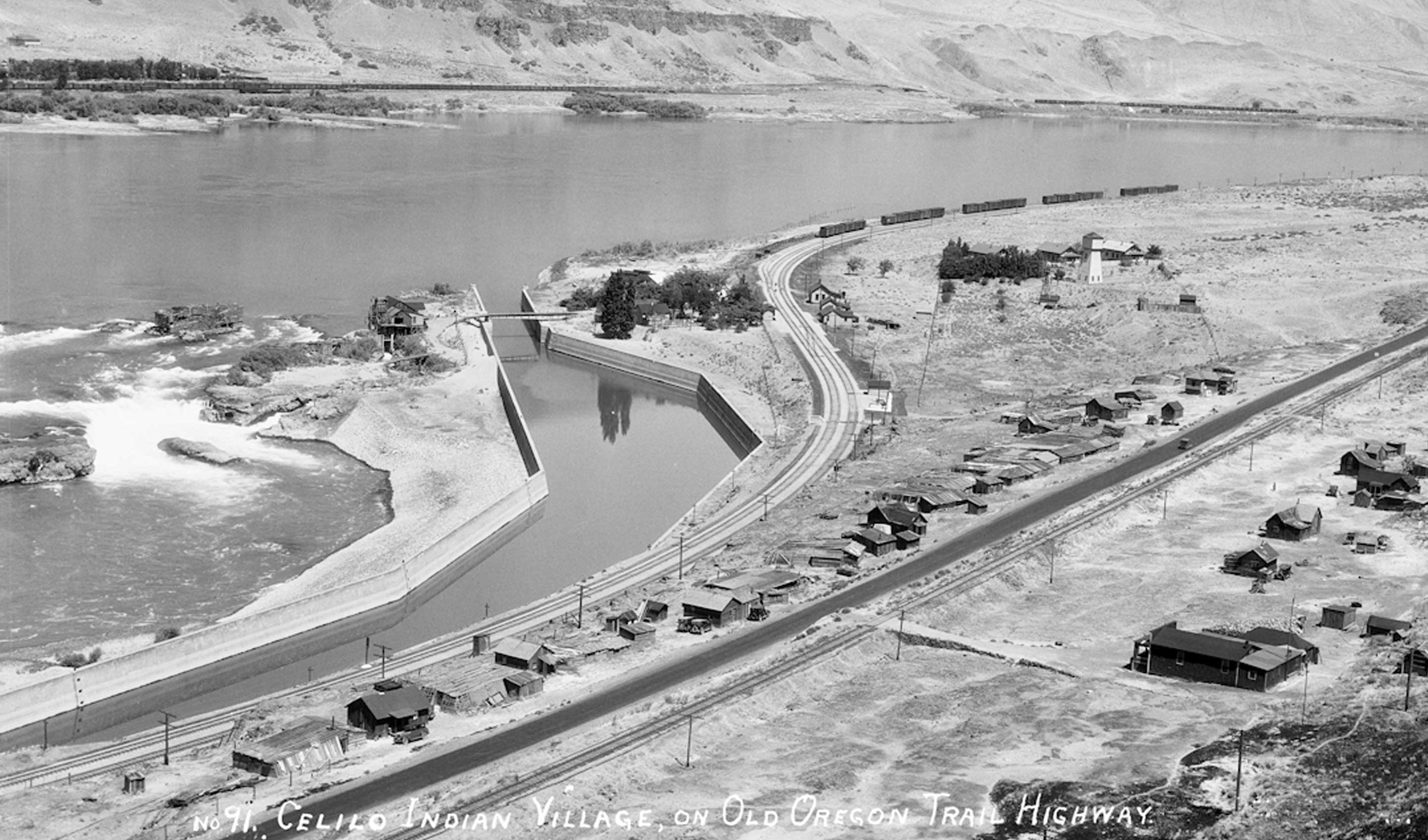 Bird's-eye view of Celilo from the rimrock above the village, about 1930. The recently-built Shell station on the east end of town is the Tumwater Auto Service Station, owned by the Seufert brothers. on the lower right is the Celilo general store. That general area is where the present Celilo Village and longhouse are located. 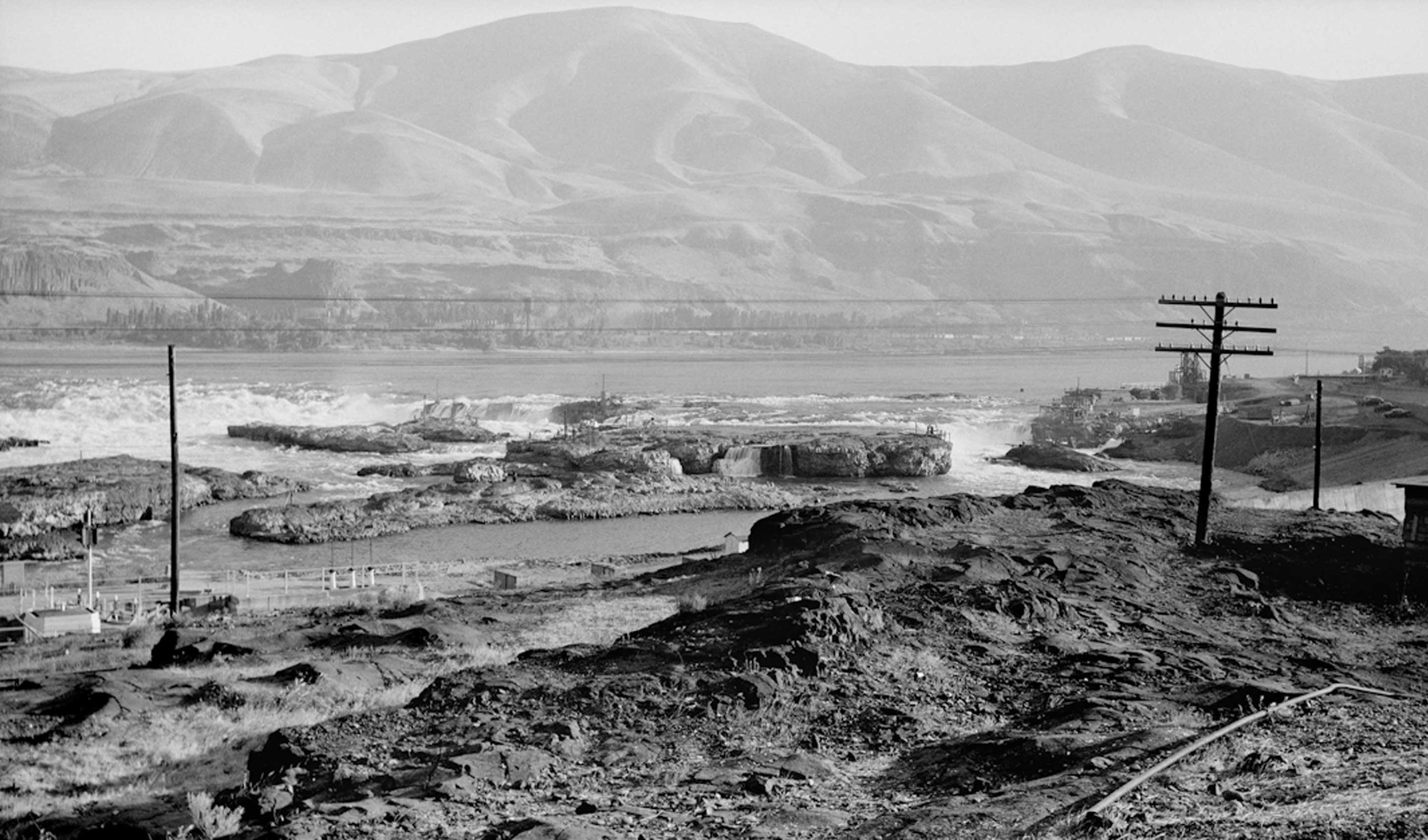 View of Celilo falls area from Celilo Indian village about 1955. On the right is the automobile bridge over the canal, and the parking lot connecting with fishing platforms on the Oregon shore at Horseshoe falls.

This gallery features images of bridges and roads near Celilo Village. Around the turn of the twentieth century, a number of bridges and roads were put in along the Oregon-Washington border. These roads and bridges were a mixed blessing, as they allowed more fishermen access to the falls, but meant that fish became harder to come by and led to undesirable traffic transversing Celilo Village and bringing tourists.