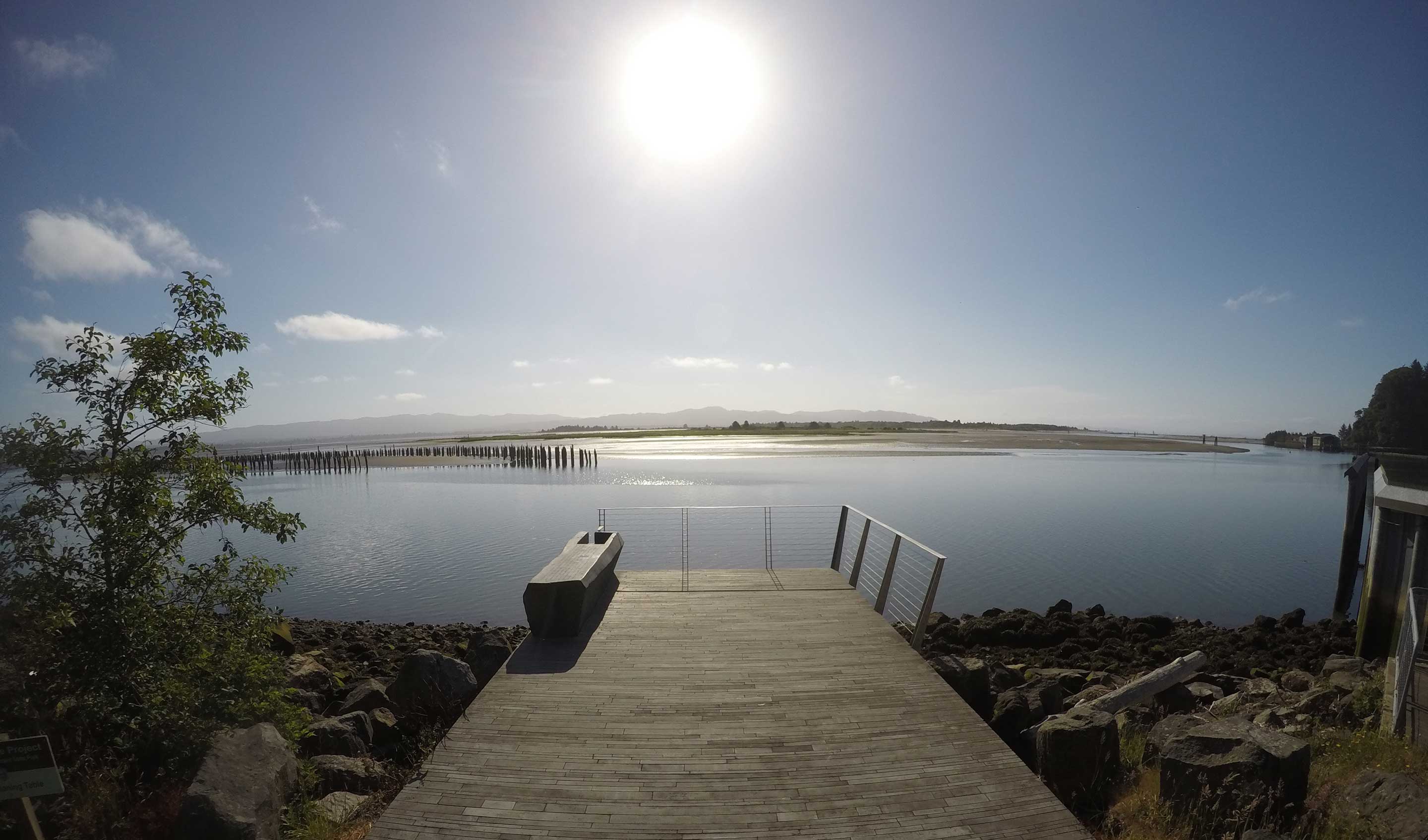 The Chinookan people knew the entrance to the great river as “Kah’eese,” and those who lived in the region closest to the mouth called the river itself “Wimahl.” But western explorers often named the landmarks they saw to reflect their nation’s claim over foreign sites. Those names remain today as windows into the early history of European and American contact in the Northwest. One of the most common questions we get at Confluence is, where did Cape Disappointment get its name? It’s certainly not a disappointing place to visit now. The answer lies in the fact that the mighty river we know as the Columbia remained invisible for decades to sailors searching for the elusive Northwest Passage.

Ocean waves crash high on the rocks at the entrance to this 1,200 mile river. Spaniard Bruno Heceta was the first European explorer to view the cape that juts into the mouth on August 17, 1775. In his ship’s log he recorded:

“…the currents and the expanse of water made me believe it is the mouth of a large river or a passage to some other sea.” He mapped the northern and southern capes and named them “San Rogue” and “San Frandoso.” [1]

The Cape or Rio de San Roque was likely named for the Catholic Saint Roch or Rocco whose death was commemorated throughout Spain on August 16 – the day before Heceta recorded the sighting. Also known as “Saint Rock” in English, the saint was specially invoked against the plague. The reduced crew of the Santiago had suffered severe hardships and loss of life due to scurvy and starvation by the time they reached the northern cape of San Rogue on their return voyage south from what was later known as British Columbia. Perhaps they hoped to invoke the saint’s help to ward off illness? They traveled alone and without a long boat so they had no opportunity to explore further inland of the bays. [2]

The Spanish claim to Alaska and the Pacific Northwest dated back to a 1493 “papal bull” (Inter caetera) and rights contained in the 1494 Treaty of Tordesillas. These two formal acts formed the basis of Spain’s claim of the exclusive right to colonize all of the Western Hemisphere (except present day Brazil), including all of the west coast of North America. Born in Bilbao of an old Basque family, Bruno de Heceta y Dudagoitia (1743–1807) was sent by the Viceroy of New Spain, Antonio María Bucareli y Ursúa, to explore the area north of Alta California in response to information that there were colonial Russian settlements there. With good cause, the Spanish also feared that explorations and trading voyages by the British would infringe on their claims to the Pacific Coast.

British Captain James Cook sailed up the Northwest Coast in 1776 but he also missed Heceta’s capes on his voyage. Then, more than a decade later British Fur trader John Meares sighted Cape Rogue, on July 6, 1788. Captain Meares tried to find an entrance to escape the high seas he was experiencing. He wrote in his log,

”…Disappointment continued to accompany us… we can safely exert that no river San Rogue exists.” [3]

Because of his frustration he renamed Cape Rogue, “Cape Disappointment.”

Four years later, in 1792, the British navigator, Captain George Vancouver came to the same conclusion. After lying off the coast for two days, studying the tides and currents, he wrote that there was no large river in the area worthy of exploration.

Finally on May 11, 1792, it was the merchant ship Captain Robert Gray of the American vessel Columbia Rediviva who realized that a river extended back from Cape Disappointment. He crossed the bar and anchored at what is now Chinook, Washington. He traded with the Chinookan people, claimed the land drained by the river and its tributaries for the United States, and named the river after his ship, “Columbia.” The second American vessel to enter the river, shortly after Gray, was the fur trader Elsie, Captain Baker commanding. The bay east of and behind Cape Disappointment is named for him – “Baker Bay.” By associating the American ship and a captain’s name with the river and the bay, the United States established a “claim” to the territory that would be duly considered throughout future international treaty negotiations over the next fifty years. And thus today we have Cape Disappointment, Baker Bay, Cape Meares, Heceta Head and, of course, the Columbia River.

The crashing waves and unpredictable tides that pounded the shore were legend in Nehalem lore. The Nehalem people, members of the Tillamook tribe, traded north along the Oregon Coast for thousands of years. The Nehalem band believed that the Pacific Ocean was once calm and unruffled by waves or tides. Their ancient stories tell of Tal-a-pus, who, bored with his god-like existence, had watched the Nehalem sporting in the calm and waveless waters of the ocean below, and, becoming jealous of their play, had kindled a great fire on the mountainside. In this he heated the gigantic rocks of Neah-kah-nie, and hurling them down the the mountain, crashed them into the water, which at once set up a furious boiling and tumbling and at last resolved itself into the great waves that now pound the shore. [5]

[2] There is no trace of justification for naming the bay to the south “San Frandoso.”