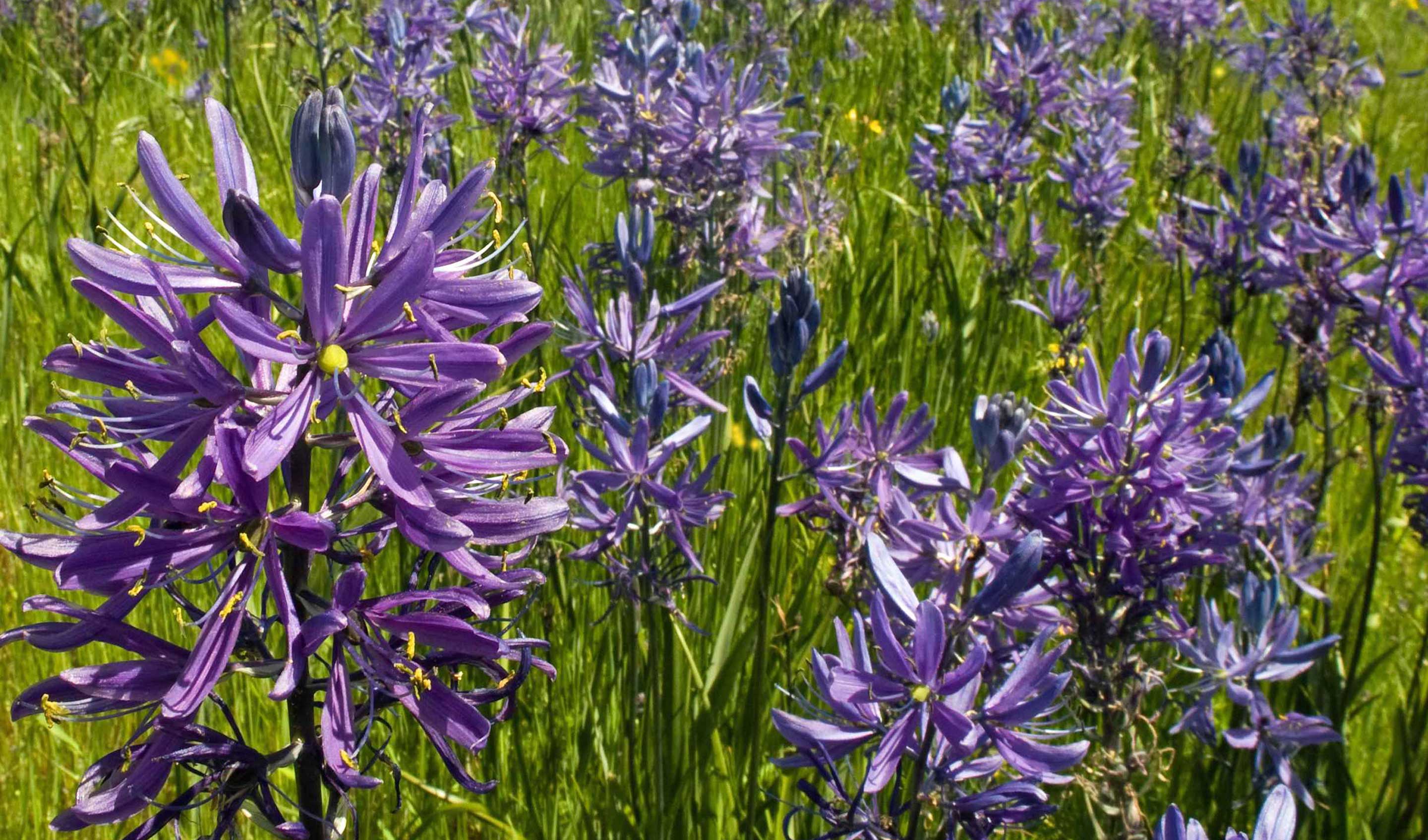 “those people treated us well gave us to eate roots dried roots made in bread, roots boiled, one Sammon, Berries of red haws some dried… This course is N. 70° W. 2 miles across a rich leavel Plain in which grt quantities of roots have been geathered and in heaps. those roots are like onions, Sweet when Dried, and tolerably good in bread, I eate much & am Sick in the evening.” [1]

In late spring and early summer Native Americans throughout the Pacific Northwest typically began to harvest camas bulbs (camassia quamash) – a popular blue-flowered plant. The Clackamas Chinookan people designated May as “brings up camas” month or among the Wishram “walicnan” meaning “camas time” was the month of April. [2] Camas was harvested by many tribes in the Northwest and along the coastline far north into Canada. It was a major food resource and trade item.

Among the Chinookan people camas was likely even more popular than wapato if they had easy access to it. Their reliance on camas as a staple was directly dependent on the size of the available camas stands and the distance to those stands – people were most willing to travel to the largest stands, thus giving the greatest harvest for their efforts.[3] Contemporary Chinookan consultants suggest that camas was imported from upriver on the Columbia.[4] Archaeologically, among the Chinookan communities, camas has been identified at Station Camp, Washington, and at Cathlapotle, Meier, and St. Johns in the Wapato Valley of North Portland. At Cathlapotle, small earth ovens yielded a relatively large amount of baked camas that was used throughout the year locally and in trade.[5]

Baked in earth ovens for one and a half to five days, camas bulbs were a rich source of carbohydrates and inulin[6] — sometimes giving rise to temporary digestive disorders, at least as recorded by foreigners to the Northwest. William Clark noted that many of his men enjoyed the sweet flavor of baked and dried camas but many were “sick in the evening.” [7] Its flavor has been described in various ways as “those roots are like onions, Sweet when Dried, and tolerably good in bread.”[8] [William Clark] James Swan, an American who lived along the Northwest Coast among indigenous people and settlers alike for nearly fifty years (1852-1900) provided a detailed explanation of camas harvesting and earth oven cooking. Swan declared that camas was his favorite vegetable next to “fried bananas,” but one wonders how often he had those to eat.[9]

The young Scottish botanist David Douglas was immediately taken with the lovely blue camas lilies that covered the lowlands along the Columbia River soon after his arrival in March 1825. Tribal women used pointed sticks to unearth great quantities of the nutritious bulbs they called “quamash.” Douglas found that the baked product – direct from earth ovens – tasted much like a baked pear. Douglas also remarked that Captain Merriweather Lewis had observed that when eating large quantities it led to bowel complaints. ”This I am not aware of,” wrote Douglas, “but assuredly they produce flatulence: when in the Indian hut I was almost blown out by the strength of the wind.”[10]

Douglas recalled a very tasty meal served him at Spokane House in late spring 1826. It consisted of “camas, bitterroot, and cakes of black tree lichen.”[11] Later that autumn, Douglas accompanied Alexander Roderick McLeod from Fort Vancouver to the rugged Umpqua drainage in search of trees with outsized pine cones. Douglas and a young interpreter came across two Indian lodges where the women of the village soon treated them to a feast of hazel nuts, camas roots, a gruel made from ground myrtle nuts, and a tea brewed from leaves and shoots of the same tree.[12]

Later that fall, as the torrential rains fell on the exploration party, two of the Hudson’s Bay Company men whipped up a stew of pounded camas roots. Douglas’s stomach overreacted to just two spoonfuls of the sweet concoction and he was awake by the fire all night wishing for only “a little tea, the greatest and best of comforts.”[13]

Douglas was one of the first botanists to note that Native Americans “managed” the landscapes of coniferous trees, wild berries and camas prairies. Archaeological studies widely confirm such management processes as ground fires that helped eliminate invasive and competitive species.[14] In a conversation with tribal elder Christopher Paul in 1967, selective harvesting was recorded:

“When gathering, the Indians would not collect the immature bulbs; Christopher Paul’s mother’s mother told him that these small, soft bulbs were ‘not worth cooking,’ and Mr. Paul has overheard his own parents discussing the matter. Mr. Paul thinks that these bulbs may have been gathered in another year, when they were mature, by the same family…The mature bulbs sometimes get as big as about 2.5” in diameter. After the bulbs become too old, however, they aren’t any good to eat, either, Mr. Paul’s maternal grandmother said.”[15]

The patches of camas were cared for by women and children, and harvested in late spring just as the blossoms were fading.  There was little grass due to the care for the site, and harvesting by digging the sod was much easier due to these gardening practices, but the work was exhausting. In 1868, botanist Robert Brown wrote of camas:

“The gathering is nearly wholly done by women and children; who use a sharp-pointed stick for the purpose; and it is surprising to see the aptitude with which the root is dug out. A botanist, who has attempted the same feat with his spade, will appreciate their skill.”[16]

It was good to gather camas when remains of the blue blossom still lingered – verifying that the plant was not death camas. Death camas (Toxicoscordion fremontii) bears a white blossom and as its name suggests it is a potent poison.

Cultivating, harvesting and processing camas was a way of life for Native Americans for thousands of years. The Bannock tribes of Idaho, Wyoming, Nevada and Oregon had avoided outright war with the Americans for many years. Their homelands and accustomed gathering grounds including Camas Prairie in southern Idaho were believed to be secured by the Treaty of 1869. Congress paid no attention to the misspellings in the treaty that confused the words “camas” and “Kansas.” To the Bannocks, the words sounded the same. To the Americans, few cared enough to make changes. Most settlers had passed on beyond the Bannocks’ Camas Prairie but near harvest time in May 1878, some careless travelers turned their hogs loose upon the prairie to forage to their hearts’ delight. They were soon followed by several more itinerant settlers who let horses and cattle graze upon the blue-flowered field. May was gathering season but suddenly for the Bannocks, after thousands of years, there was nothing left to gather. A series of raids unleashed outright war for the Bannocks and those other affiliated tribes who hoped to rebuke the settlers. The Nez Perce War had ended only seven months earlier and the region was weary of war.  General O.O. Howard, Commander of the Department of the Columbia headquartered at Vancouver Barracks, called his troops across the Northwest into action. For several months battles, raids and skirmishes ensued as the army chased the Bannocks into the Blue Mountains in Oregon. There, the Bannocks sought the support and partnership of the Umatillas and the Yakamas but they were soon disappointed. Chief Homily of the Umatillas ultimately ended the hostilities of the war. Arranging a conference with the only surviving Bannock chief, Homily met Chief Egan and 30 of his men. With a given signal, the Umatillas killed Chief Egan and all 30 warriors. General Howard soon recognized Chief Homily’s loyalty.

Today Camas Prairie is a part of the Camas Prairie Centennial Marsh Wildlife Management Area and is managed by the Idaho State Fish and Game department. Camas lilies continue to bloom there in late May. Here’s a good description from Sunset Magazine:

“Across this southern corner of the Camas Prairie, encircling May’s still wet center of the Centennial Marsh, several dozen Indians of the Sho-Ban [Shoshone-Bannock] Tribe begin drumming, signaling the start of homecoming festivities that are held each spring. Rooted in tribal tradition, they echo the same ritual and wrestle the prairie to collect their bounty while embracing the camas of today. The camas bloom and harvest is more limited now, mostly centered in and around the Centennial Marsh. But the prairie still evokes the spirit of earlier days. For much of the past century, it has been suspended in time. It humbly but proudly displays testaments to its past. Homesteader cabins, old schoolhouses, sheep corrals, and grain elevators punctuate its wide-open spaces. Upon closer inspection, we can find Indian petroglyphs in Hill City’s rock outcroppings, vestiges of the Oregon Short railroad line that serviced the area, and traces of Goodale’s Cutoff, a detour off the Oregon Trail. …Looking forward, the Camas Prairie as the Indians knew it, and as we have known it, is an endangered place.” [17]

[3] Duer, Douglas and Nancy J. Turner. Keeping It Living: Traditions of Plant Use and Cultivation on the Northwest Coast of North America. Washington: University of Washington Press, 2015. 91.

[6] Inulin is a prebiotic fiber that nourishes bacteria in the digestive system. It is commonly present in onions, garlic, leeks, Jerusalem artichokes and asparagus.

[15] Duer and Turner. Keeping It Living. 114.  Note: Christopher Paul was a tribal elder in the Tsartlip First Nation in British Columbia.