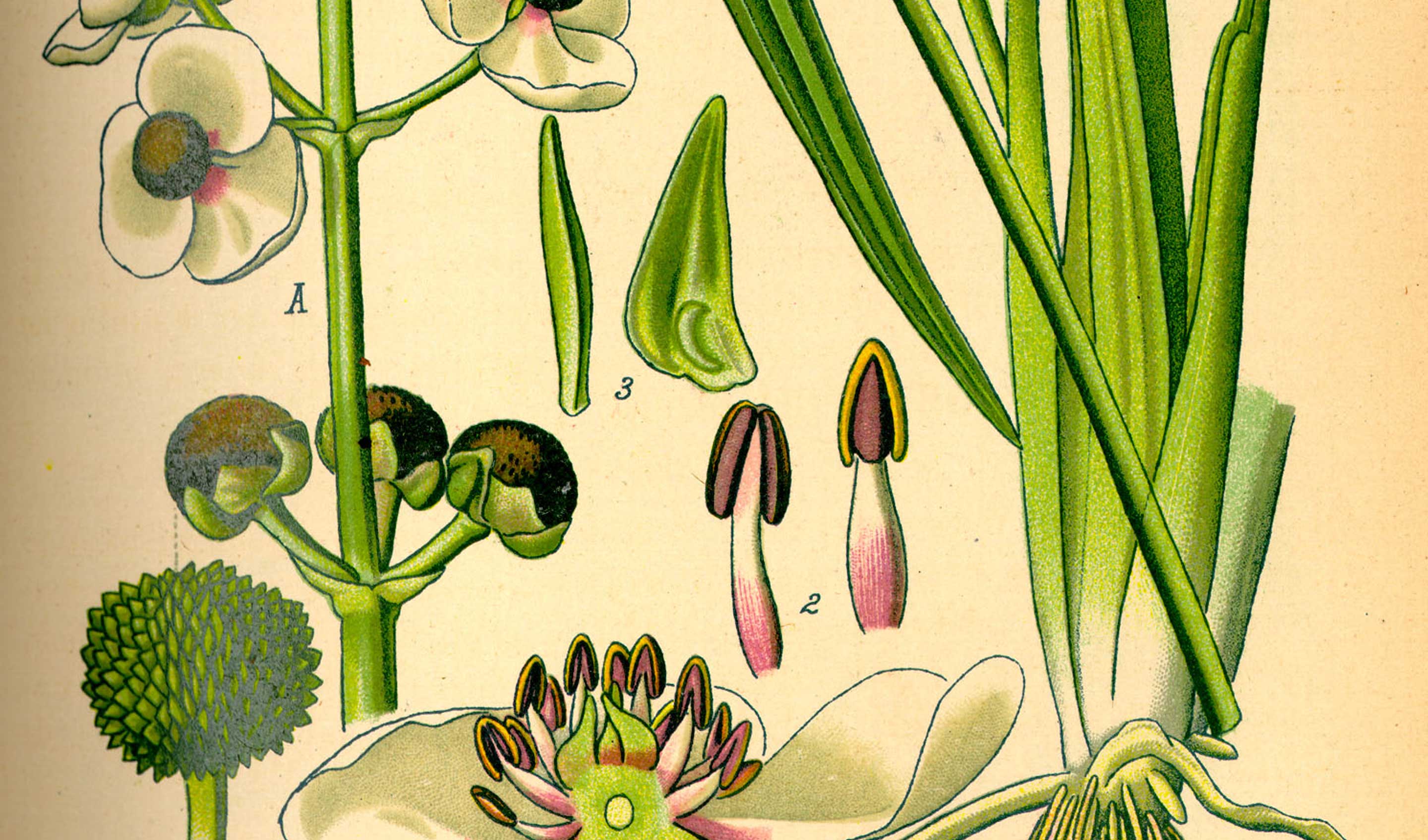 Can you guess what naturally nutritious carbohydrate has arrow-shaped leaves, extracts nutrients and metals from wetlands, and is traditionally harvested with your toes?
Here’s a hint: It loves its home in the Sandy River Delta where it helps nourish muskrats and porcupine with its tubers; swans, geese and ducks eat its seeds.

Yes, it’s the aquatic plant Sagittaria (arrow-shaped) cuneata E. Sheldon or “Wapato.” It’s also known as “Duck potato” or “arrowroot.”[1] Explorer Merriweather Lewis dropped back one day from the rest of the party “to examine a root of which the natives had been digging great quantities in the bottoms along the river.”[2]

Lewis may have recognized this herbaceous plant because it grows in every state except Nevada, Alaska and Hawaii. Surprised that they were a food source, Lewis noticed Native Americans harvesting the small starchy tubers about the size of chestnuts. The tubers or “potatoes” are produced by the plants’ rhizomes growing in wetland silt and muck.

The plant still grows in marshes, swamps, streams, ponds and lake borders. When wetlands are recovered and natural habitats are restored, like at the Sandy River Delta near Troutdale, Oregon, the wildlife also benefit as the native plants thrive again.

Wapato once grew in abundance and it was eaten by many indigenous groups throughout Washington and Oregon. The tubers were widely traded from harvesting centers to neighboring areas. Often, along the middle and lower Columbia, families would own large patches of wapato, camping beside their harvesting sites for a month or more.[3] Sometimes villages spent the mild winter near wapato ponds or sloughs. Sauvie Island, in Multnomah County, Oregon across the Columbia River from the Confluence Land Bridge, was named “Wappetoe Island” by Lewis and Clark. On March 29, 1806, Clark recorded how the women harvested wapato:

“by getting into the water, Sometimes to their necks holding by a Small canoe and with their feet loosen the wappato or bulb of the root from the bottom from the Fibers, and it imedeately rises to the top of the water, they Collect & throw them into the Canoe, those deep roots are the largest and best roots.” [4]

Pulling out the plant did not loosen the tubers; the silt had to be worked to get at them. Muskrats also enjoyed wapato and one could sometimes find tubers that they had dug up, as one source points out.[5]

In the 1820’s, Native Americans showed the adventuresome botanist David Douglas the secrets of wapato harvesting and he thrived on them almost exclusively when in the field. Wapato is very bitter if eaten raw, but like potatoes they may be boiled, steamed or fire-roasted. Indigenous people dried them, too, for soups or pounded them into cakes (and traded them to newcomers like Lewis and Clark) or ground dried wapato into flour. Other edible parts of wapato include the tender unfurling leaves and stalk. Boil them like other greens. The flower stalk before it blossoms and the lateral tips of the immature rhizomes are also edible, raw or cooked. The white petals of the blossom are tasty raw with a mild mint flavor. [6]

In 2011, this sacred first food returned to the Yakama Nation. Wheat lands were transformed to original wetlands after a decades-long restoration process carried out by the tribe. Wapato also returned after a seventy year “respite.” [7]  Wapato was as important to the Yakama diet as other sacred foods like salmon or huckleberries. To celebrate and to reintroduce this first food, a school gym was designated as the feasting hall and laid out like traditional longhouses. By introducing it to students, tribal elders felt that future generations would now have the opportunity to preserve traditions and sacred rituals that had fallen out of practice. Student Emmanuelle Wallahee commented,

“I was taught that nothing’s ever lost. It’s just been put away for awhile.” [8]

Before foraging for and ingesting wild plants, it is extremely important to know the dangers and be 100% certain of the plant’s identity. Wapato may have been an important food source historically but not today, according to Confederated Tribes of the Grand Ronde cultural educator Greg Archuleta. He told us wapato is known to absorb metals and other pollutants. The USDA lists it as not palatable for human consumption.

UPDATE: After we first posted this story, archaeologist Melissa Darby contacted us to say that there are many places where wapato does not include metals and other pollutants, including Sauvie Island near Portland. She said tests there showed the wapato to be “clean and safe” to eat. Darby adds, “Let everyone know that the idea of wapato with heavy metals is overblown, and not to eat it near mine tailings but other than that it is ok.” Thanks Melissa!

This area was originally part of the Columbia or Chief Moses Indian Reservation, established by two executive orders in 1879 and 1880. The reservation originally extended from Lake Chelan and the Chelan River on the south, to the Columbia and the Okanogan River on the eastern side, to the Canadian border on the north, and to the crest of the Cascade Range on the western side. Chief Moses’s homelands included the site of Sacajawea Park and the Confluence Listening Circles, but his people were no longer welcome there. In 1883, President Chester A. Arthur gave in to the demands of the settlers and railroad builders, and restored nearly all of this reservation to public domain. [9]

[1] Not to be confused with the Arrowroot starch, drawn from the rhizomes of several tropical plants, traditionally Maranta arundinacea, Manihot esculenta, and Zamia integrifolia, which are often labelled as “arrowroot.” Arrowroot biscuits are popular for babies when teething.

[7] Lyons, Natasha, et al. “Katzie and the Wapato: An Archaeological Love Story.” Archaeologies 14, no. 1. 7-29. Archaeological digs carried out by the Katzie First Nation in the Fraser Valley sloughs unearthed 4700 year-old wapato there.