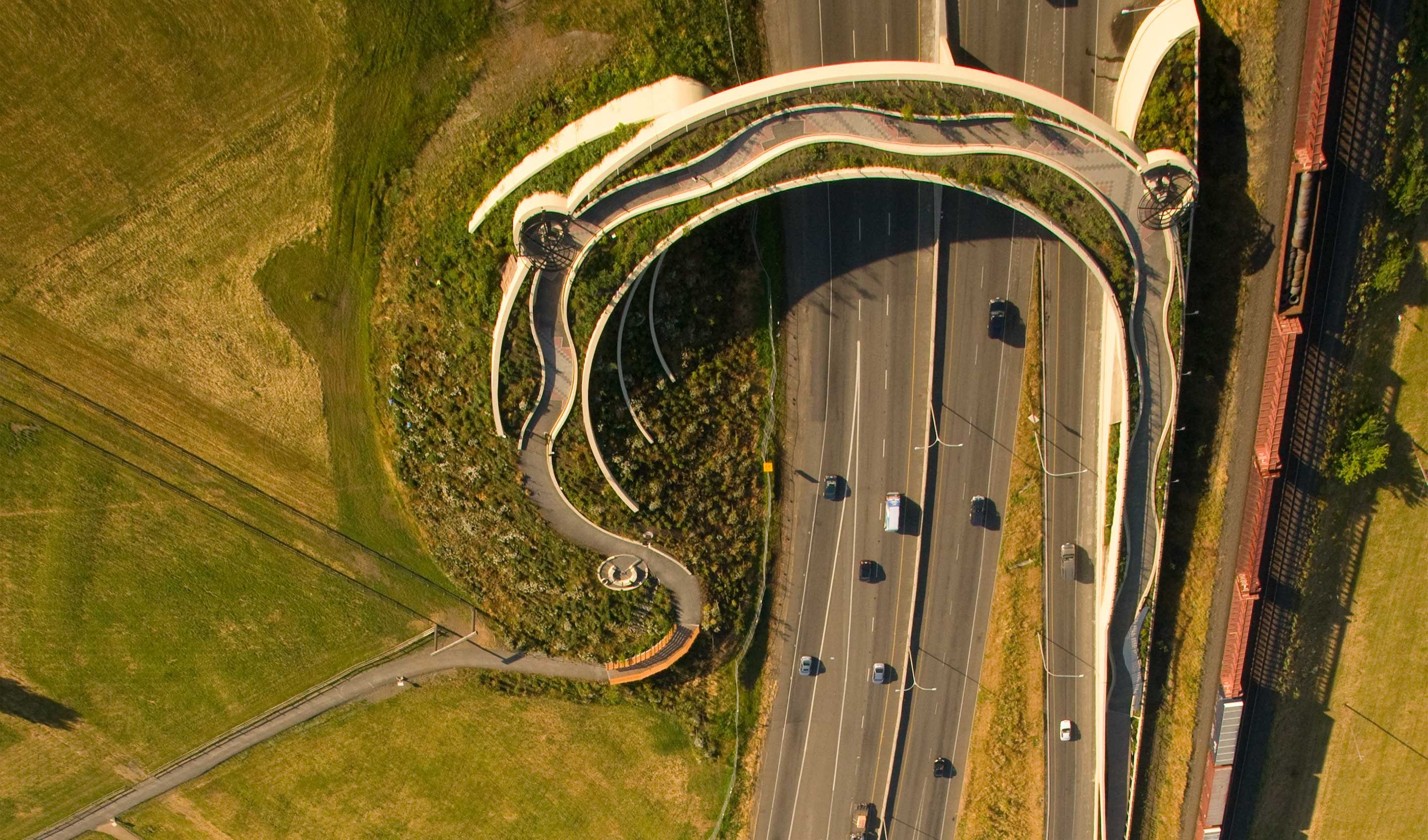 Here on the Columbia River in Vancouver, Washington, was a gathering place for Native peoples, before the establishment of historic Fort Vancouver. When the railroad and highway went through, a short walk from the river to the fort was cut off. Now, a wide curving landscaped bridge offers a way for people to walk from the riverfront, up and over the railroad and highway, to reach the Fort Vancouver National Site. Jones and Jones Architects designed the Land Bridge following discussions with artist Maya Lin. At the river end of the bridge, a Welcome Gate marks the entry. Beginning with an Entry Grove, native plantings border the walkway from the gate, up a ramp and over the bridge, and circles down a mound on the other end.

Drawing from the history and archaeology of the site, the bridge design features scenic viewpoints at intervals: a River Overlook, Prairie Overlook, and Village Overlook. Each circular overlook is detailed with words from Native languages, metal Spirit Baskets with imagery connected to local petroglyphs, and signage giving historical context for the view.

Location: A Crossroads for Canoes, Trains and Airplanes Vancouver, Washington

The Fort Vancouver National Site sits close to the Columbia River, just east of I-5, with access from the Highway 14 exit. In addition to the Land Bridge installation of the Confluence Project, the reserve includes former U.S. Army Barracks, the Ft Vancouver Historic Site, and small sections of the riverfront. From the Reserve parking lot, a walk past Fort Vancouver and through a grassy area leads to the Land Bridge.

Easy access from a sloping riverbank to a prairie made the site of great value to native peoples, and traders. As the railroad, highway, and small airport went in, its character as a crossroads kept growing. However, the site lost its access to the river. Now, with the Land Bridge crossing over the railroad tracks and highway, it is possible again to walk the short distance from Fort Vancouver to the river.

The Lower Columbia River Valley is an extensive floodplain, where layer upon layer of gravel, sand and silt cover a base of ancient volcanic basalt rock. Seasonal flooding continually deposited more sand and silt in the area, until construction along the riverfront and dams controlled the flow.

One special feature of the Vancouver region is the active volcano Mount St Helens. Its 1980 eruption is the only one is recent memory, but the young volcano has been active for 4000 years. Since 1400 C.E., Mount St Helens had erupted about once every century.

Before settlement, the Reserve site was a patchwork of prairie, forest, and wetlands. Now one small section of riverfront remains as floodplain. Behind the historic officers’ housing, a few old conifers remain from the earlier thick forest.

Originally, prairie, oak savannas and conifer forests covered the Reserve. Hardwood trees grew at points along the riverbank. Ponds filled up and then dried out seasonally, while two small lakes were a year-round feature of a wetlands area in the river’s floodplain.

Native prairie on the site also covered large stretches of land from South Puget Sound through the Willamette Valley. Prairie west of the Cascade Mountains is distinct from the drier plateau prairie on the east side of the mountains. Nearly 150 of the plants that grew in them were unique to this area west of the Cascades. The prairies’ relatively flat and open character attracted farmers and builders to put them to other uses. Now an estimated 1% remains of this endangered ecosystem.

Prairie grasslands of Southwestern Washington were full of fescue grasses, dotted with other natives such as tall Garry oaks, huckleberries, yellow prairie violets, and showy yellow balsam root. In the spring, prairies turned bright blue with blooming camas lilies. Camas lily bulbs were a major food source for native peoples–a kind of prairie equivalent to the wapato root that was harvested from the wetlands section of the site. Camas bulbs are said to taste like potato, and become sweeter as they are cooked slowly.

Black-tailed and white-tailed deer lived in Southwestern Washington prairies, as did many birds. A few of the other prairie animals were isolated in this distinct ecosystem long enough to become unique species. Some are now threatened with extinction, such as the Mazama pocket gopher and the streaked horned lark. Some Western Washington butterflies depend on native fescue grasses, and are also endangered now. 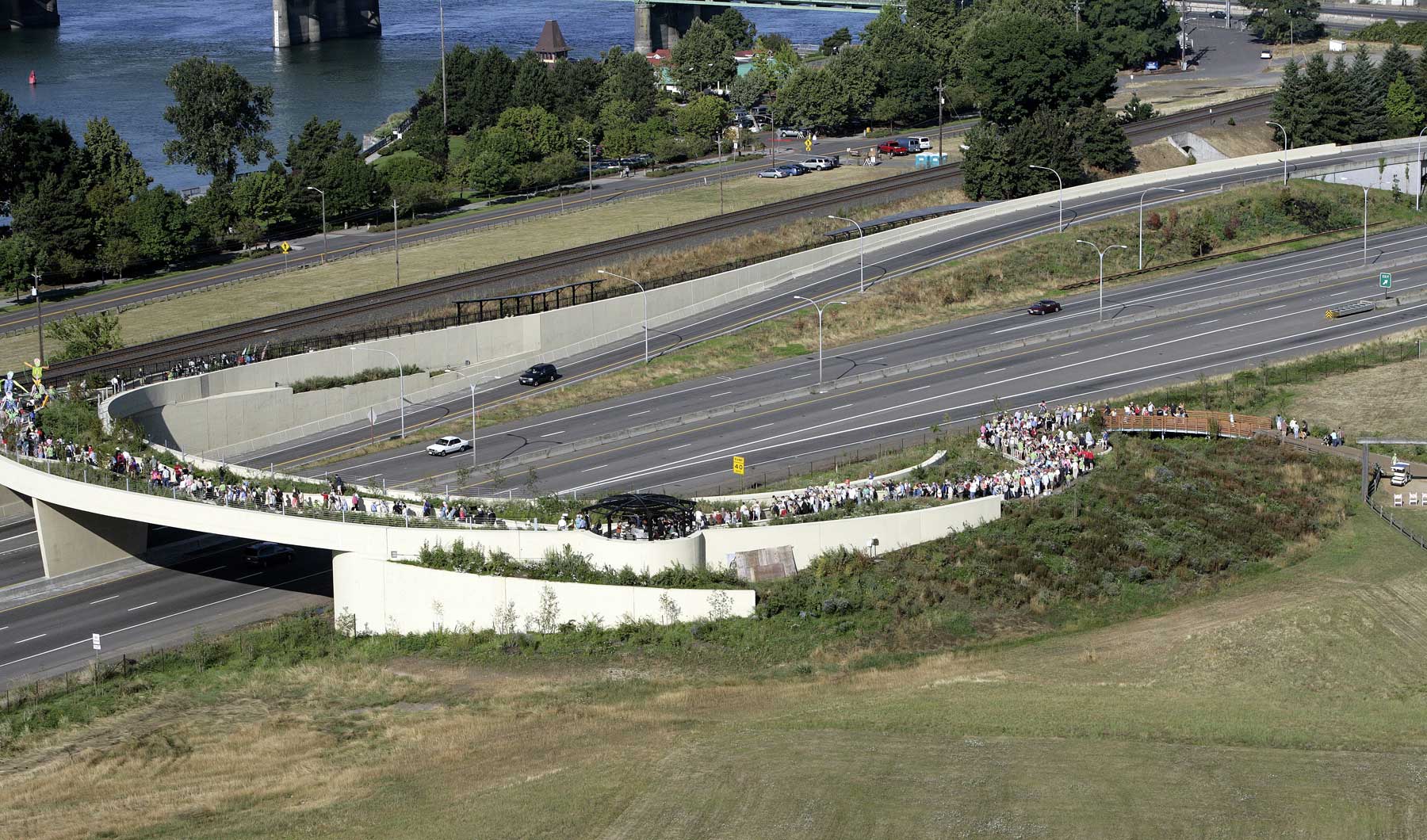