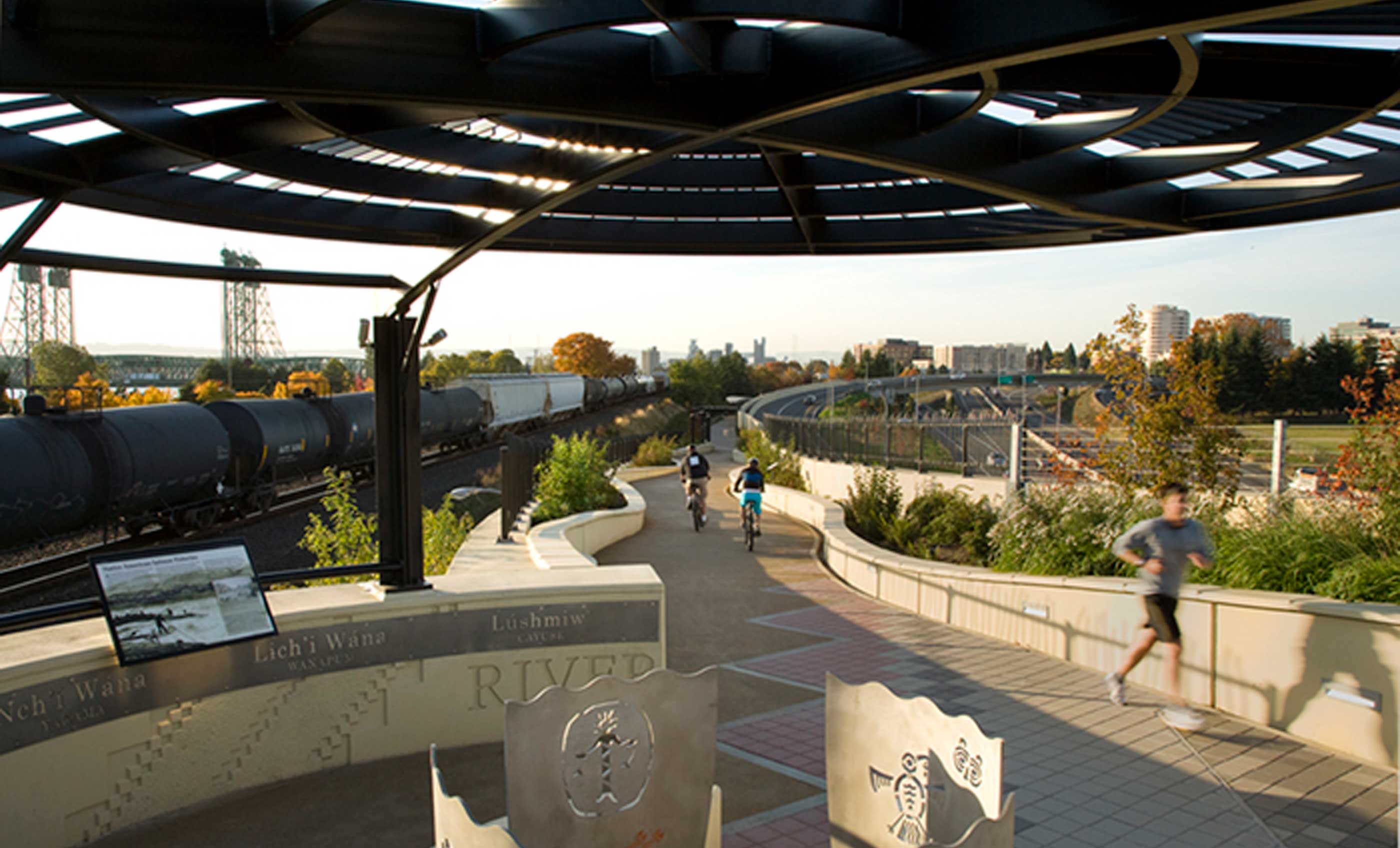 “The land bridge is a link back to the Klickitat Trail, Lewis and Clark, and the development of the Northwest. It completes a circle that’s been broken.”   –Johnpaul Jones, designer of Land Bridge; Jones and Jones Architecture and Landscape Architecture

A railroad and highway sliced through the site of today’s Vancouver Land Bridge in the 20th century, and cut off the site from its river access which had given the place its historical importance. An earlier wetlands area and Mud Lake were both filled in and covered over when the railroad was constructed. Long ago, native plants were replaced with gardens and lawn. Confluence decided to reconnect the river with the site of Fort Vancouver by putting in a land bridge verdant with native plants for pedestrians to travel along.

The Land Bridge crosses over Highway 14 and the railway line, to reconnect the Columbia River to the end of the historic Klickitat Trail, and to Fort Vancouver. A quarter-mile walk over the bridge now replaces what was a three-mile drive from the Fort to the riverfront.

Landscaping and planting design for the Land Bridge create a sense of the original ecosystems of the site. From the bottomland hardwoods area of the river end, the plantings create a transition to a prairie area, and then to a grasslands area at the opposite end of the bridge, near the Fort. Visitors who walk along the bridge are invited to stop at three viewpoints: the River Overlook, Prairie Overlook, and Village Overlook. The curving bridge overpass forms an arc that implies a large circle. This circle of connection also recalls a round basket, with basketry patterns appearing on the walkways and buttresses of the bridge. From above, the fragments of pattern along the walk can be read as the partially revealed form of a giant basket.

An Entry Grove and sculptural Welcome Gate are on the river side of the Land Bridge, as if to welcome visitors arriving by canoe. Native hardwood trees represent the original riparian (riverside) forest. The Entry Grove is the first of four native ecosystems planted in a continuum from one side of the Land Bridge to the other. Two cedar logs topped with two crossed cedar canoe paddles form the Welcome Gate, created by Native artist Lillian Pitt. A cast-glass face of a Lower Columbia River woman is set into the blade of each paddle.

From the Welcome Gate, a walkway at ground level leads to the ramp of the bridge. Native forest plantings bend into the curving walkway, with red alder, redosier dogwood, vine maple and ferns. They are watered by a gutter system that channels rainwater from the bridge. Where a ramp begins the bridge ascent, forest plantings shift to a native wet prairie of lupines, sedges, meadow rushes and camas lily.

The River Overlook is one of three nodes along the bridge. The view of the river and land beyond is featured, while native shrubs obscure the highway underneath. Stainless steel Spirit Baskets by Native artist Lillian Pitt stand at the center of the circular overlooks. Images similar to ancient petroglyphs from the Columbia River Gorge area are cut into the metal basket.

Along the walkway, reddish brown and black insets are laid out in Lower Columbia River Tribes basketry patterns. The word for ‘River’ is written in nine Native languages written on stainless steel panels. The twelve-foot decomposed granite walkway weaves from side to side of the forty-foot span of the bridge. Curved planting beds outline the walkway, and resemble an undulating topography with concrete sides that rise and fall.

The bridge was engineered to support the heavy weight of large-scale plantings growing in tons of soil–essentially a green roof on the bridge. Consulting engineers KPFF set foam within the concrete deck to lighten it, and designed retaining walls of mechanically-stabilized earth with concrete facings.

“We grabbed the prairie and pulled it over the highway.”   –Johnpaul Jones

Along the next section of walkway, a planting of grasses, wildflowers, nootka rose, and serviceberry represent a dry prairie native ecosystem. Sustainability was a guiding principle in design of the Land Bridge. Rain that drains from the beds here is channeled down the bridge to water plants at the two ends. The decomposed granite walkway surface is permeable.

Another Spirit Basket by Native artist Lillian Pitt is cut with different petroglyph images. Their shapes are a reminder of the 12,000 years that native peoples lived along the Columbia River Gorge. Along the Language Walk, the word for ‘Land’ appears in nine native languages. Collecting these native language words, and confirming how they should appear in print, required a lengthy collaboration with the tribes.

Nine native language words for ‘People’ appear in this section. A rounded Village Overlook is oriented toward the site of a polyglot village of Europeans, French Canadians, Native peoples, Americans and Hawaiians. The village’s as-yet unexcavated archaeological site will eventually be developed as an exhibition by the National Park Service.

The terrace overlook is recessed into a large earthen mound at the base of the bridge. At this northern upland side of the bridge, the pathway curves around and down the mound planted as prairie grasslands. White oak planted with shrubs such as chokecherry, ocean spray and snowberry give a sense of the grassland (also known as oak savannah) that originally grew here. On this end of the bridge, rainwater channeled from the bridge empties into a cistern, and is then pumped out to irrigate the plantings. At ground level, the path concludes where a historical wagon road ran through the site. Fort Vancouver is a couple of minutes walk away.

At the dedication of the Land Bridge on August 23, 2008, a ceremonial walk across the bridge was led by giant puppets, followed by Maya Lin and Johnpaul Jones, children, and community leaders. Thousands of people enjoyed the occasion, and Washington’s state Poet Laureate Samuel Green read a poem “What We Carry On the Trail,” written for the occasion. Since then, the work has had a lot of use by walkers, bicyclists, joggers, and tourists.

According to Jane Jacobsen, former Executive Director of the Confluence Project, Land Bridge “has become a magnet for the community and a signature project for Vancouver and the region.”