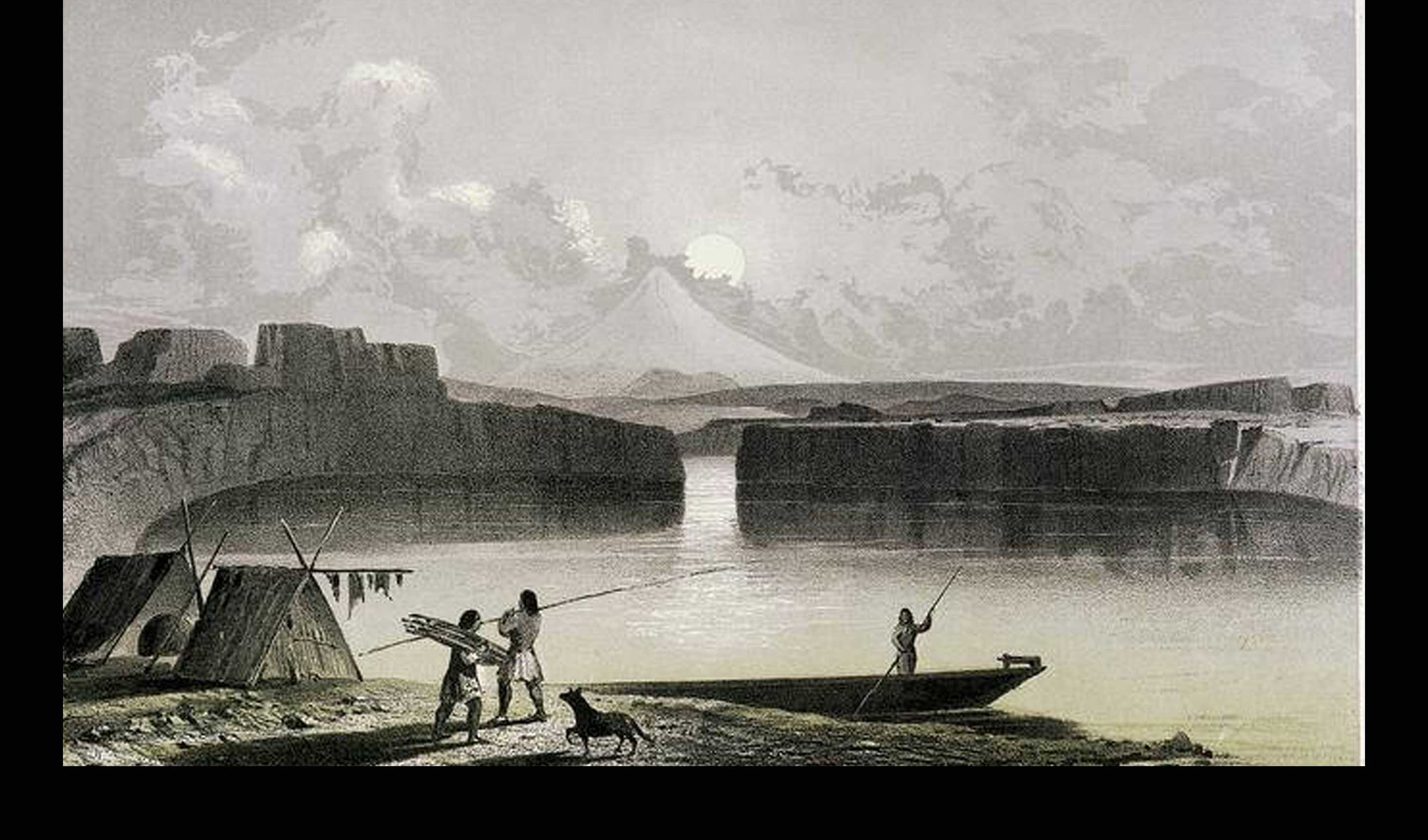 An illustration of drying beside the river. Engraving, J. M. Stanley. 1853. University of Washington Special Collections 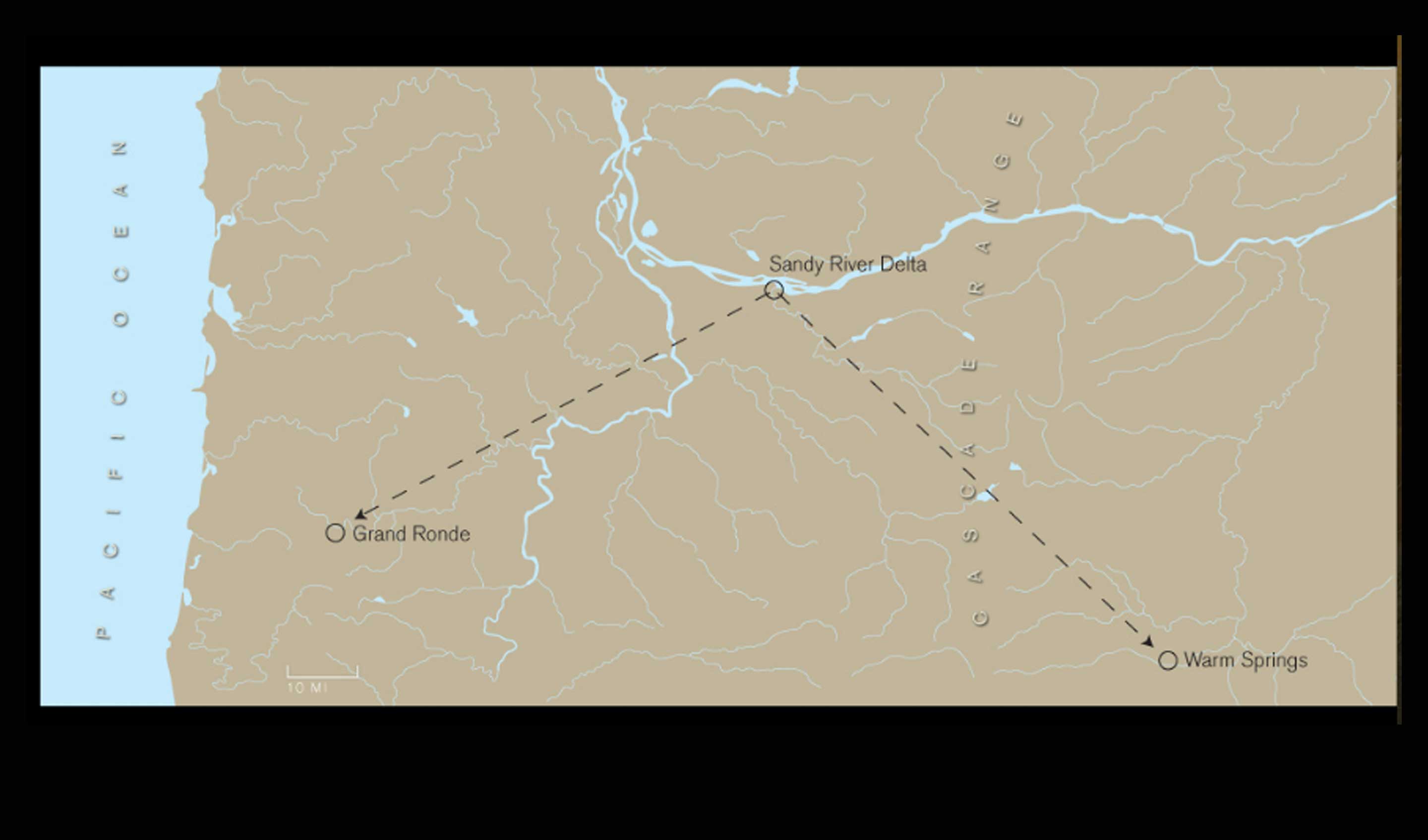 Historically, Upper Chinook Native peoples lived along the section of the Columbia River that spans from the mouth of the Cowlitz River in Longview, Washington to The Dalles, Oregon- a length of over 160 miles. To the west of the Sandy River, the Multnomah (Wappato) and Clackamas bands of the Upper Chinook people were based between the Cowlitz and Sandy Rivers. On the other side of the Sandy River Delta, the Wasco band lived the furthest east of the Chinook people.

Native people in the area of the Sandy River Delta used the marshes, as well as the rivers, for subsistence and transportation. One example is for gathering wapato, the edible bulb of a plant that grew in shallow water. Women went out in small, ultra-lightweight canoes of ten to fourteen feet length to load up with wapato to bring home.

People from villages on the Columbia and its nearby tributaries would travel to the Lower Sandy River for fishing and gathering. They could canoe between the Sandy River Delta and the Willamette River along a slough as an alternative to the Columbia River. When the rivers rose, the slough would become a large lake.

Lewis and Clark were not the first explorers to visit the Sandy River Delta: a scouting party for Capt Vancouver had come there from the Pacific Ocean in 1792. However, Corps of Discovery members left a better description. When the Corps stopped at the delta on November 3, 1805, they found a lot of sand and named it the Quicksand River, unaware that it was sediment from a recent eruption of Mt Hood. Four months later, on their return east, they camped in the area again for several days.

One Corps member, Whitehouse, wrote that one village there “was by far the handsomest of the kind that we had yet seen.” In another place, Capt Clark noted many small canoes on the bank, and saw women using them to collect wapato:

…with one of these [canoes] a woman enters a pond…and by means of her toes and feet breakes the bulb of this plant loos from the parent radicle and disincumbering it from the mud it immediately rises to the surface of the water when she seizes it and throws it into her canoe…they will remain in the water for hours together in surch of this bulb in middle of winter.

Upper Chinook people lived in plank houses for part of the year. When the rivers rose in the spring, people moved out of the flood plain, towing the planks from their house behind their canoes. During summer, temporary houses with sides of cattail mats and cedar bark roofs were convenient to move from one fishing location to the next. In 1805, the Corps of Discovery stopped at a large village near the Sandy River Delta. There they noted the presence of one plank house and twenty-four temporary houses with bark roofs. While returning east through this area in 1806, a few Corps members visited their local guide’s home. They were surprised to see a large house with seven apartments, with about 100 people living there.

“the residence of our Pilot…consists of one long house with Seven appartments or rooms in Square form about 30 feet [square] each room opening into a passage which is quit[e] through the house…the house is built of bark of the White Cedar…” -William Clark, April 3, 1806

Reservations established in the 19th century were typically not located on the Columbia or on valuable agricultural land. The lives of Upper Chinook peoples had centered on the Columbia River and its tributaries, but they and many other native people of Oregon were sent to reservation territory on the dry east side of the Cascades. As their homelands were appropriated for farming, industry, and settlers’ homes, tribes found it difficult, if not impossible, to maintain themselves so far from the rivers that had sustained them, despite the fishing rights they retained.

Settling with Trout and Celery in Troutdale

One of the largest settlements on the taken land was Troutdale. John Harlow planned a town west of the Sandy River delta during the mid-19th century, and since he raised trout in ponds on his farm, he thought it fitting to name the town Troutdale. Troutdale was quickly overfished, and by the 1870s salmon and steelhead runs to the Sandy River were already dropping. By 1887, people were taking fish eggs from the Sandy River to hatch, and soon built a rack across the river for taking eggs. This was later replaced with a full dam in 1913. Troutdale’s mineral rich soil meant that farming was very profitable, and farmers became known especially for the celery and gladiola bulbs they grew in the sandy rich soil. Cows were also brought in to graze on the plentiful grasses.

Industry boomed in Troutdale in the late 19th to early 20th centuries, as logging companies floated logs down from the top of the Sandy River. Tens of thousands of logs at a time careened downstream when the water was high. Other industries also settled in the area: an aluminum plant was built on the west side of the delta in the 1940s. Toxic emissions entering the water affected local agriculture and ended the gladiola business.

All of this pushed Natives farther and farther away from their lands, as it was reshaped and reformed and its resources extracted. This was a very difficult period for the tribes, which became worse in the mid 20th century.

We call that hostile legislation. . . When you think about Western Oregon tribes and how they got hammered–not only the allotments but the Termination Act in 1953. . . They lost everything in the Willamette Valley.  –Antone Minthorn, Chair of the Confederated Tribes of the Umatilla Reservation

Not all of the native peoples living in the Sandy River and Portland region survived the 19th century, and those who did were far from home. For example, the Wasco people now live among confederated tribes on the Grande Ronde and Warm Springs Reservations in Oregon.

The federal Indian Termination policy of the 1950s, which cut support for tribal self-governance, hit especially hard in Oregon. Sixty-two tribes and bands native to Oregon were ‘terminated’ out of 109 tribes terminated nationally. This terminated more tribes in the state of Oregon than in the entire rest of the country combined. Some, including the Confederated Tribes of the Grande Ronde, were restored after the policy was reversed in 1975.